For Democracy's Sake: Foundations and Democracy Assistance in Central Europe 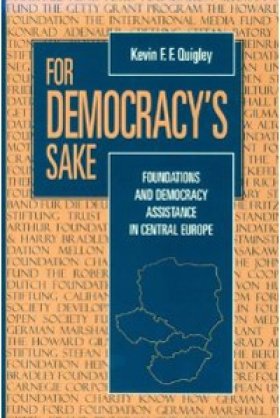 Assisting democracy has become a major concern of the international community since the end of the cold war. Not only governments, but private actors—foundations and other nongovernmental organizations—are playing a growing role in these efforts, rivaling that of governments and international institutions. This pathbreaking study examines foundations’ democracy assistance programs in Central Europe in the years immediately following the fall of the Berlin Wall, both measuring their size and evaluating their strategies.

For Democracy’s Sake assesses such efforts in post-cold war Central Europe through extensive field research, a rare series of workshops in which Central Europeans knowledgeable about democracy efforts participated, and the author’s own experience as a foundation executive. The book includes chapters concentrating on foundations’ efforts in the Czech Republic, Hungary, Poland, and Slovakia, a chapter on regional initiatives, and a chapter on the philanthropy of George Soros. This timely volume offers broadly applicable lessons regarding the most effective strategies, approaches, and techniques for helping others develop their own versions of democracy.

Kevin F. F. Quigley was director of Public Policy at the Pew Charitable Trusts, where he developed a program in support of the transitions toward more democratic and market-oriented societies in Eastern Europe. He was a guest scholar at the Woodrow Wilson International Center for Scholars in 1995 and 1996.

6. Regional Projects: Going Against the Grain

7. George Soros: Leader of the Band

“Quigley presents a vast amount of new information, based on a comprehensive, sophisticated research effort. This material will be of great utility to persons interested in Eastern Europe, and the book will certainly become the standard work on the role of private foundations in the former communist states.”—Thomas Carothers, Carnegie Endowment for International Peace, author of Assessing Democracy Assistance: The Case of Romania

“An interesting account of the role played by foundations—public and private—in assisting democratic development… a wealth of unique information and detail.”—Democratization