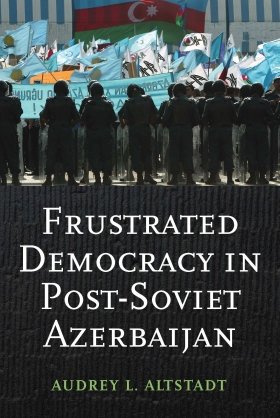 Frustrated Democracy in Post-Soviet Azerbaijan tells how a newly independent oil-rich former Soviet republic adopted at first a Western model of democratic government but turned toward a corrupt authoritarianism.

Audrey L. Altstadt’s story begins with the 1988–94 Nagorno-Karabagh war, which stimulated Azerbaijani nationalism and laid the foundations for a democratic movement, at first successful but soon displaced in a coup. Western oil companies arrived, money flowed in—its amount became “almost unimaginable,” says Altstadt—and a government anxious to stay in power began to repress the political opposition, media, and civil society. Political Islamism emerged, despite the country’s long tradition of secularism, as an alternative to the stifled democratic opposition and a critical voice resisting the West’s continued support for the oppressive regime.

Altstadt’s work draws on her own experiences in Azerbaijan, the Azerbaijani press, publications by in-country experts and nongovernmental and international organizations, and interviews with diplomats and businesspersons. It follows her earlier works, The Azerbaijani Turks: Power and Identity under Russian Rule and The Politics of Culture in Soviet Azerbaijan, 1920–1940.

Audrey L. Altstadt is a professor of history at the University of Massachusetts Amherst. She was a fellow at the Wilson Center in 2014–15.

1. Starting Points: History and Geopolitics and What They Tell Us

3. Azerbaijan’s Best and Brightest: The Rise, Decline, and Renewal of the Democratic Opposition

4. Oil Lifts All Boats? Social and Economic Repercussions and the Rise of Corruption

6. Allah-u Akbar: Islam in Azerbaijan—Piety, Politics, and the Future

7. What’s Next? The Choices Ahead

“Dr. Altstadt is the finest American scholar on Azerbaijan. She has the perspective of a historian complemented with current contacts inside and outside Azerbaijan and a strong policy sense.”—Richard Kauzlarich, former US Ambassador to Azerbaijan