Governance on the Ground: Innovations and Discontinuities in the Developing World 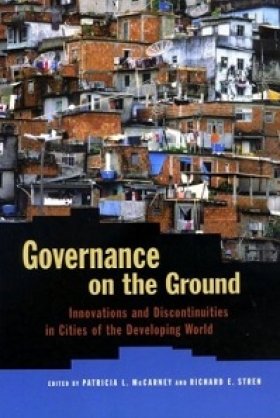 Governance on the Ground shows people at a local level working through municipal institutions to take more responsibility for their own lives and environment. This study reports what social scientists in eight local networks found when they chose their own subjects for a worldwide comparative study of institutional reform at the local level. Governance on the Ground is the culminating product of the Global Urban Research Initiative, a major 1990s research effort that created a worldwide network of some 400 social scientists.

All chapters present governance at a local level in a period characterized by decentralization and democratization, when many governments were improving local accountability and transparency and people were actively participating in public forums, especially through institutions of civil society. Many chapters show the close connection between social science and actual policy formation and implementation in the developing world.

1. Introduction: Toward the Comparative Study of Urban Governance
Richard Stren

3. Ethnographies of Governance: Urban Spaces and Actors in the Middle East
Seteney Shami

9. "My Soul I Can See": The Limits of Governing African Cities in a Context of Globalization and Complexity
Mark Swilling, AbdouMaliq Simone, and Firoz Khan

10. Governance and Municipal Management in Mexico and Colombia: Between Clientelist Practices and New Forms of Democratic Government
Emilio Duhau and Martha Schteingart

“A very important publication on urban governance in a variety of national and regional settings within the developing world.”—Salma A. Shafti, CUS Bulletin on Urbanization and Development

“The evidence gives rise to cautious optimism as local residents learn to take control of existing institutions and frame their own to serve their interests.”—Choice