Skip to main content
Support
Show
Streaming
The Role of Masculinities in International Security and Peacekeeping
Show
Streaming
Statelessness in the Middle East
Show
Streaming
Going Digital: The Promise of Fintech in Latin America
Show
Streaming
What it Took to Win: A History of the Democratic Party
Explore More
Close
Blog post
Energy Security
Russia’s Energy Transit Play, a Crooked Game
By Andrian Prokip on May 23, 2022
Share on FacebookShare on TwitterShare via Email
Share
Part of the Rule of Law
Book

Governing the Ungovernable: Institutional Reforms for Democratic Governance in Pakistan 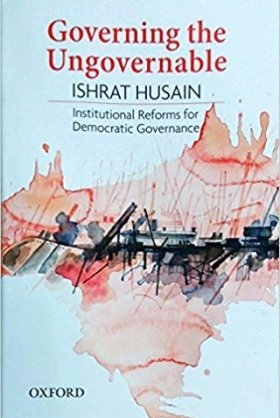 At this event, Dr. Husain will discuss his new book, which proposes a selective and incremental approach for reforming key public institutio...

Pakistan, since its independence in 1947, had to face tumultuous years for the first four decades. Despite the many challenges, both internal and external, the country was able to register a 6 per cent average annual growth rate during the first forty years of its existence. The country was ahead of India and Bangladesh in all economic and social indicators. Since 1990, the country has fallen behind its neighbouring countries and has had a decline in the growth rate.

This book attempts to examine the reasons behind this slowdown, the volatile and inequitable growth of the last twenty-five years, and through a process of theoretical and empirical evidence argues that the most powerful explanatory hypothesis lies in the decay of institutions of governance. It also suggests a selective and incremental approach of restructuring some key public institutions that pertain to accountability, transparency, security, economic growth, and equity.