Insurgent Fragmentation in the Horn of Africa: Rebellion and Its Discontents 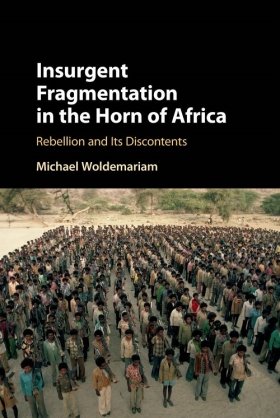 When insurgent organizations factionalize and fragment, it can profoundly shape a civil war: its intensity, outcome, and duration. In this extended treatment of this complex and important phenomenon, Michael Woldemariam examines why rebel organizations fragment through a unique historical analysis of the Horn of Africa's civil wars. Central to his view is that rebel factionalism is conditioned by battlefield developments. While fragmentation is caused by territorial gains and losses, counter-intuitively territorial stalemate tends to promote rebel cohesion and is a critical basis for cooperation in war. As a rare effort to examine these issues in the context of the Horn of Africa region, based upon extensive fieldwork, this book will interest both scholarly and non-scholarly audiences interested in insurgent groups and conflict dynamics.

Chapter One: Organized Rebellion and Its Intractable Problem

Appendix: Narrative of Fieldwork and Description of Data Sources

'Woldemariam pinpoints the importance of dynamics within insurgent groups and develops an original argument that explains how losses and gains in territorial control foment rebel fragmentation. His counter-intuitive conclusion, that rebel unity is strongest during times of prolonged stalemate, has important policy implications for those looking to encourage conflict resolution.' Terrence Lyons, George Mason University, Washington, DC

'Why do rebel organizations fragment and why does it matter? Drawing on a new database of fragmentation in 171 rebel organizations in sub-Saharan Africa (1946-2006), Woldemariam argues that fortunes on the battlefield hold the key to understanding these dynamics. When rebels lose territory, commitment problems push them apart. But even when they win, the reduced threat encourages fragmentation by weakening their incentives for continued cooperation. Ironically, therefore, rebel organizations are more likely to cohere during stalemates on the battlefield.' Paul D. Williams, George Washington University, Washington, DC

'This fascinating book reaches striking and original conclusions about the dynamics of African rebel groups, with a particular concern for the Horn, but with much broader applications.' Christopher Clapham, Centre of African Studies, University of Cambridge

'Insurgent Fragmentation in the Horn of Africa combines a path-breaking theoretical analysis of the fragmentation of rebel movements with a deep and detailed historical study of cases from the Horn of Africa to provide a fascinating account of a much-neglected topic. This is an essential contribution to the literature on the dynamics of civil wars.' Alex de Waal, Tufts University, Massachusetts

'Theoretically sound and empirically robust, this book is a definitive work on rebel fragmentation in the Horn of Africa. In a region where scholarship has long been tainted by partisan politics, Dr Woldemariam presents a rare dispassionate analysis of the internal dynamics of insurgent groups in one of the most conflict-ridden regions of the world.' Assefaw Bariagaber, Seton Hall University, New Jersey

'Michael Woldemariam's book offers a new and important explanation of rebel cohesion and fragmentation. By focusing on the impact of battlefield dynamics on rebel unity, Woldemariam helps us understand why insurgent cohesion is so challenging and prone to breakdown. His careful, deeply researched comparative evidence from Ethiopia and Somalia valuably brings these fascinating cases into dialogue with the broader literature on political violence. This book deserves wide attention and engagement.' Paul Stanliland, University of Chicago