Law and the Russian State: Russia’s Legal Evolution from Peter the Great to Vladimir Putin 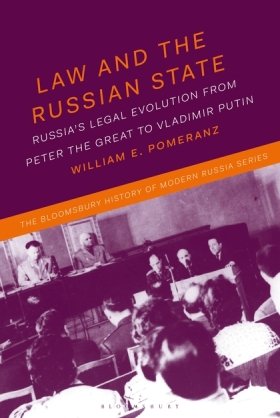 Russia is often portrayed as a regressive, even lawless, country, and yet the Russian state has played a major role in shaping and experimenting with law as an instrument of power. In Law and the Russian State, William Pomeranz examines Russia's legal evolution from Peter the Great to Vladimir Putin, addressing the continuities and disruptions of Russian law during the imperial, Soviet, and post-Soviet periods. The book covers key themes, including:

The work also analyzes legal culture and how Russians understand and use the law. With a detailed bibliography, this is an important text for anyone seeking a sophisticated understanding of how Russian society and the Russian state have developed in the last 350 years.

Introduction
1. Law and Empire under Peter the Great
2. The Expansion of Russian Legality
3. The Judicial Reforms of 1864 and the Modernization of Imperial Law
4. Law, Politics, and Revolution
5. Filling in the Blanks: The Creation of Socialist Law
6. Socialist Legality and Illegality
7. Russia's Long Constitutional Crisis: 1985-1993
8. The 1993 Constitution: A Framework for Reform
9. Vladimir Putin and the Restoration of State and Law
Conclusion

“A lively and engaging account of law and legal development in Russia, past and present. It is unique in its emphasis on how law throughout Russian history has served the state.”  – Peter H. Solomon, Jr., Professor Emeritus, University of Toronto, Canada

“Most Westerners consider the Russian state lawless, but William Pomeranz shows the great importance Russians attribute to law. This is a scholarly and thoughtful guide to law, a little understood but crucial aspect of Russia's long history. It should become the standard work on its subject.”  – Geoffrey Hosking, Emeritus Professor of Russian History, University College London, UK

William Pomeranz, the Director of the Wilson Center’s Kennan Institute, is an expert guide to the complexities of political and economic developments in Russia, particularly through the lens of law. He leverages extensive, hands-on experience in international and Russian jurisprudence to address a wide range of legal issues, from the development of Russia’s Constitution to human rights law to foreign investment and sanctions. He is also the author of Law and the Russian State: Russia's Legal Evolution from Peter the Great to Vladimir Putin (Bloomsbury, 2018).