Marigold: The Lost Chance for Peace in Vietnam 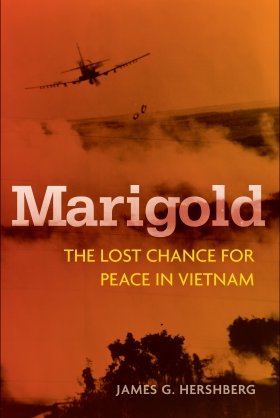 Marigold presents the first rigorously documented, in-depth story of one of the Vietnam War’s last great mysteries: the secret Polish-Italian peace initiative, codenamed “Marigold,” that sought to end the war, or at least to open direct talks between Washington and Hanoi, in 1966. The initiative failed, the war dragged on for another seven years, and this episode sank into history as an unresolved controversy. Antiwar critics claimed Johnson had bungled (or, worse, deliberately sabotaged) a breakthrough by bombing Hanoi on the eve of a planned historic secret US-North Vietnamese encounter in Warsaw. Conversely, LBJ and top aides angrily insisted there was no “missed opportunity,” Poland never had authority to arrange direct talks, and Hanoi was not ready to negotiate. Conventional wisdom echoes the view that Washington and Hanoi were so dug in that no real opportunity existed. This book uses new evidence from long hidden communist sources to show that Warsaw was authorized by Hanoi to open direct contacts and that Hanoi had committed to entering talks with Washington. It reveals LBJ’s personal role in bombing Hanoi at a pivotal moment, disregarding the pleas of both the Poles and his own senior advisors. The historical implications of missing this opportunity are immense: Washington did not enter negotiations with Hanoi until more than two years and many thousands of lives later, and then in far less auspicious circumstances.

James G. Hershberg is professor of history and international affairs at George Washington University, and former director of the Cold War International History Project at the Woodrow Wilson International Center for Scholars.

(Marigold was cited in the September 2, 2013, New York Times obituary of Janusz Lewandowski, the Polish diplomat whose connections with the North and South Vietnamese leadership and friendship with Italian diplomat Giovanni D’Orlandi were central to the Marigold peace initiative.)

3. Intermezzo: August to October 1966— A “Mosaic of Indiscretions and Rumors”

A roundtable on the book in the Winter 2015 edition of the Journal of Cold War Studies includes reviews by George C. Herring, Wallace Thies, Merle L. Pribbenow, Sophie Quinn-Judge, Jessica M. Chapman, and Michael R. Adamson:
“Hershberg’s research is truly astounding… indefatigable effort and breathtaking research.… The extraordinary length of the book is balanced by excellent writing. The book is written with verve and grace, in prose that sparkles.… Marigold is a signal accomplishment. It answers many important questions that have bedeviled participants and historians for years. Hershberg’s work makes clear the complexity of Vietnam War diplomacy and the perils of peacemaking. It is international history in the grand style.”—George C. Herring, author of America’s Longest War, LBJ and Vietnam: A Different Kind of War, and The Secret Diplomacy of the Vietnam War

“Marigold offers unprecedented attention to the ICC, its members, and its internal dynamics … One cannot question Hershberg’s intimate knowledge of the wide range of characters one encounters in this book.”—George Dutton, Journal of Asian Studies

“James Hershberg has produced a truly admirable work of diplomatic history that will undoubtedly stand as the definitive account of the courageous but unsuccessful joint Polish-Italian effort to bring Hanoi and Washington to the negotiating table in 1966 and bring the Vietnam War to an early end. It is a major feat that the author was able to discover such a substantive, original subject matter in the crowded field of Vietnam War scholarship, and the favourable attention this work has drawn is well-deserved … Marigold is essential reading for advanced students and professors of the Vietnam War, the Cold War in Asia, and peace history/conflict resolution studies.”—Sean J. McLaughlin, Canadian Journal of History

“James G. Hershberg’s book is a valuable addition to the discourse that the Vietnam conflict was far more complicated than originally assumed.… Hershberg traces Marigold from its inception to the end in minute detail, using archival evidence from numerous countries and interviews of key individuals. His research is not only revealing on Marigold but sheds further light on the international dimensions of the Vietnam War.”—Eugenie M. Blang, American Historical Review

“[Marigold] is, in short, the very best kind of scholarship in international history. … Historians of the Vietnam War, and the Cold War more broadly, will learn much from this remarkably fresh and revealing historical account.”—Andrew Preston, International Affairs

“The result of a massive amount of research, this voluminous book delves as deeply as seemingly possible into virtually every aspect of the multinational effort to bring the warring sides together just before the huge American build-up in Vietnam … This massive book is a well-written, in-depth look at the facts surrounding a controversial and convoluted abortive peace effort that, had it taken place, could have significantly altered the course of the Vietnam War.”—Marc Leepson, The VVA Veteran

“The product of Hershberg’s inquiry is Marigold, a staggering exercise in historical scholarship leveraging both established sources and a huge array of newly surfaced documentary materials and research drawn from 15 countries around the world … Hershberg has achieved his presumptive goal of a hidden history that had been the subject of intense speculation over the years but never comprehensively told.”—Gordon M. Goldstein, Washington Post

“This is a superb piece of scholarship, a study that will make a major contribution to our understanding of the Vietnam War in general and the Marigold peace initiative in particular. The research base is simply astounding and what is more, Hershberg shows a marvelous ability to take this mass of material and render it into a gripping and powerful narrative. Marigold: The Lost Chance for Peace in Vietnam is history-writing at its best—evocative, elegant, well-organized, deeply researched, and authoritative.”—Fredrik Logevall, Cornell University, author of Choosing War: The Lost Chance for Peace and the Escalation of War in Vietnam

“The book will be, I believe, a blockbuster addition to the scholarship of the Vietnam War and, more generally, to Cold War history. Hershberg has produced a remarkably engaging study, a novelesque work of non-fiction that succeeds brilliantly in evoking the feel of 1966 Saigon, Hanoi, Warsaw, Austin, and Washington, It will rank among the finest and most ambitious examples of the ‘new Cold War history’ and be nothing less than a model for historians and graduate students of how to conduct research in international history and how to weave research drawn from multiple nations into a compelling narrative.”—Mark Atwood Lawrence, University of Texas at Austin, author of The Vietnam War: A Concise International History and Assuming the Burden: Europe and the American Commitment to War in Vietnam

“This is a well-written, in-depth look at the facts of a controversial and convoluted peace effort that could have significantly altered the course of the Vietnam War.”—Publisher’s Weekly

“Hershberg has done remarkable work, piecing together the Marigold story from newly available Soviet documents, D’Orlandi’s journals, and numerous interviews. He has calmed oceans of detail into a graceful narrative, an important work for Vietnam-era and Cold War historians.”—Karl Helicher, Library Journal

“Marigold: The Lost Chance for Peace in Vietnam delves deep into the diplomatic maneuvering that transpired in the shadows of the American war in Vietnam. James G. Hershberg offers a book that strikes a near perfect balance between macro and micro history.… With a trove of primary sources from all parties, including diplomatic exchanges, interviews, and diaries, Hershberg weaves a masterful analysis of the clandestine world of Cold War-era diplomacy. … All students and scholars of both the Vietnam War and Cold War will want to own a copy of Marigold.”—Robert Thompson, H-War