Orange Revolution and Aftermath: Mobilization, Apathy, and the State in Ukraine 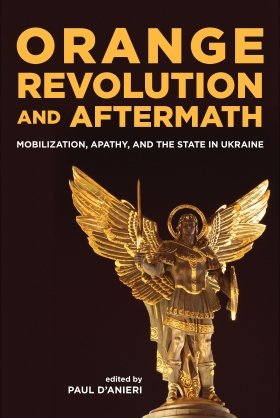 In 2004, hundreds of thousands of Ukranian protestors mobilized in the streets of Kyiv against authoritarian rulers who had clearly falsified the Fall elections. The size and efficacy of the Orange Revolution, as the protest became known, surprised political observers—and even the participants themselves. In the aftermath, many observers concluded that civil society, long thought dead in Ukraine, was alive and well.

After the success of the Orange Revolution, it was widely expected that civil society groups would take an increasingly prominent role in Ukrainian politics, reinvigorating democracy. Yet that influence diminished rapidly, and when the new government also became tainted with corruption, there was no protest or counterattack. This book explores why the influence of civil society groups waned so quickly.

The contributors to this volume probe civil society in Ukraine from a variety of disciplinary perspectives to understand the contest for social mobilization in Ukraine. The essays provide a wealth of new data based on surveys, interviews, documentary analysis, and ethnography.

Paul D’Anieri is a professor of political science and dean of the College of Liberal Arts and Sciences at the University of Florida.

“With all chapters showing impressive empirical depths and sophisticated theoretical analysis, this volume should be a required reading for anyone interested in contemporary Ukraine and civil society more generally.”—Oxana Shevel, Canadian-American Slavic Studies

“An excellent addition to the small number of book-length studies on the Orange Revolution.”—Journal of Ukrainian Studies

“The editor has done an outstanding job bringing the diverse chapters together…. I warmly recommend this book to anyone interested in social movements in Ukraine and other post-Soviet countries.”—Par Gustafsson, Europe-Asia Studies

“This is a rich collection, which maintains a high standard.… This is an important resource for Ukrainian studies and for anyone interested in the general politics of post-Communism.”—Andrew Wilson, Slavonica

“This book takes a step back from the immediate events and asks some important and interesting questions about the state of Ukrainian democracy and society today.”—Paul Kubicek, Oakland University