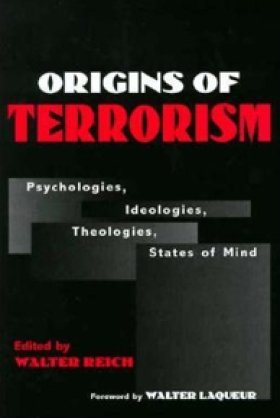 Terrorists and terrorism have become a major force internationally. Hostage-taking and other acts of violence for political ends are common all over the globe. This groundbreaking study sheds new light on the phenomenon of terrorism.

This book examines and explains the nature and sources of terrorists’ beliefs, actions, goals, worldviews, and states of mind. Origins of Terrorism addresses, with scholarly responsibility as well as necessary urgency, one of the most vexing intellectual and political challenges of our time.

The contributors to this book bring deep learning and experience in realms that are vital to an understanding of the arenas within which terrorist behavior takes place-arenas such as ideology, nationalism and religion. The authors explore terrorist behavior in its troubling richness and diversity, and identify the ways in which it develops, grows and sustains itself. In addition, they study the mechanisms that enable terrorists to easily carry out violent acts against innocents, as well as the ways in which leaders of governments respond to terrorist actions and threats. Finally, they identify the opportunities for future research in the psychology of terrorism as well as the limits of such research

This collection, under Reich’s editorship, will help us to understand terrorism as well as the motivations behind it. It is an important study that is bound to affect the way we look at world politics.

Part III. States of Mind: How Do Terrorists Think? Which Psychological Mechanisms Enable Them to Do What They Do?
9. Mechanisms of Moral Disengagement
Albert Bandura
10. The Readiness to Kill and Die: Suicidal Terrorism in the Middle East
Ariel Merari

Part V. The Psychology of Terrorism: What Can We Know? What Must We Learn?
13. Questions to Be Answered, Research to be Done, Knowledge to Be Applied
Martha Crenshaw
14. Understanding Terrorist Behavior: The Limits and Opportunities of Psychological Inquiry
Walter Reich

“These essays contain an excellent blend of theory with specific facts and narrative accounts of dealing with terrorism. I don’t know of another book which has the sweep of this one, the illustrative detail, and the welcome, refreshing recognition that there is no neat explanation for terrorism. This book will have a major impact on future research.”—David F. Musto, Yale School of Medicine

“Pursue[s] the pathology of terrorism through the centuries.… A fascinating amount of information.”—Washington Post

“A disquieting but fascinating book.… Strongly recommended.”—British Journal of Psychiatry

“An honest and penetrating effort to explain the role of human psychology in terrorism.”—Canadian Journal of Political Science

Global Fellow;
Walter Reich is the Yitzhak Rabin Memorial Professor of International Affairs, Ethics and Human Behavior, and Professor of Psychiatry and Behavioral Sciences, at The George Washington University; a Senior Scholar at the Woodrow Wilson Center; and a former Director of the United States Holocaust Memorial Museum
Read More