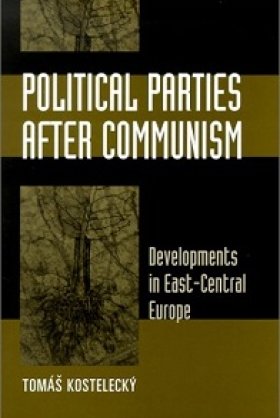 After forty years of one-party rule under Communist regimes, how were the countries of East-Central Europe to get back to the business of competitive politics in 1989? One key factor was the resumption of party politics, and this book reviews the post-Communist development of parties in the Czech Republic, Slovakia, Poland, and Hungary. Kostelecký describes party history up to 1947, and then covers the Communist and post-Communist periods. Historical, cultural, and social factors are all taken into account in this synthetic work.

Tomáš Kostelecký is senior researcher and scientific secretary, Institute of Sociology, Czech Academy of Sciences. He was recently a JSPS fellow at the Slavic Research Center, Sapporo, Japan. He was a Fellow of the Woodrow Wilson International Center for Scholars in 1996–97.

3. The Party System: A Product of a Country’s History and Culture?

4. The Party System: A Reflection of Social Cleavages?

5. The Party System: A Product of the Rules of the Game?

“A trim, lucid, first cut at the evolution of party systems in postcommunist Poland, Hungary, the Czech Republic, and Slovakia… a very clear, informative and thoughtful comparison.”—Foreign Affairs

“A thoughtful overview of the development of party politics and party systems.”—Anna Grzymala-Busse, Slavic Review

“The great merit of Kostelecký’s book is the author’s ability to bring together both the established classics such as Lipset and Rokkan, and much of the burgeoning literature on party systems in post-communist Europe (particularly the works written in the languages of the region) under one roof.”—Tim Haughton, Europe-Asia Studies

“This is a timely review of almost ten years of study of electoral behavior in East Central Europe, providing, for the first time, an understanding of the general trends in party formation and support since the collapse of communism in the region. It is clearly written and well organized, accessible to scholars and students alike.”—Paul Shoup, Professor of Government and Foreign Affairs, University of Virginia

“Like many studies of postcommunism in East-Central Europe, the underlying question driving this lucid overview of political parties in the region is whether Hungary, Poland, the Czech Republic, and Slovakia are becoming more like their Western European neighbors.… Highly recommended.”—Choice

“One of the great attractions of the book is that it…seeks to move beyond a traditional area studies approach.”—John Ishiyama, Comparative European Politics