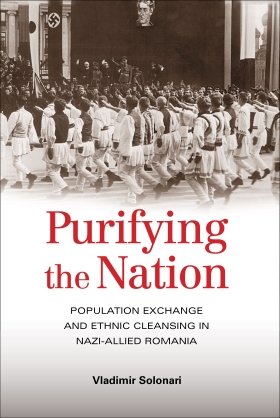 Purifying the Nation is a provocative new exploration of the Holocaust in World War II Romania. Challenging nationalist claims, Vladimir Solonari argues that the persecution of Jews and Roma by the Romanian government was not a response to pressure from the country’s ally, Nazi Germany, but rather stemmed from the vision of an ethnically pure Romania which was traditional to Romanian nationalism. Through a rigorous, archive-based analysis of the country’s interwar political and intellectual climate, as well as policies and practices during Romania's alliance with the Nazis, Solonari sheds valuable new light on the genocidal activities of one of Hitler’s European satellites.

Vladimir Solonari is an associate professor of history at the University of Central Florida. He was a public policy scholar at the Woodrow Wilson Center in 2001.

Part I: The National Ideal
1. One Ideal or Many? A Short History
2. Colonization and Resettlement: Early Romanian Experience
3. Into the Nazis’ Fold
4. Romanian Eugenics: Racism without a “Race”
5. Modern Science and Nationalism: Two Romanian Cases
6. The Population Exchange with Bulgaria: “An Opportunity Missed”?

Part III: Between the Dream and Reality
13. Romanianization
14. Deporting Roma
15. Stopping Deportations and Changing Course
16. “Voluntary” Population Exchange with Bulgaria
17. Getting Ready for the World That Never Came: Planning Population Exchanges
18. Letting Them Out, and Keeping Them Out

“Solonari’s work is exciting to read and his thesis is vigorously argued. The material is well organized into chapters, with a good narrative and excellent illustrations…. Purifying the Nation is an energetic and keenly-expounded report on research.”—Alex Drace-Francis, European History Quarterly

“Purifying the Nation makes a major contribution to the literature on ethnic cleansing during World War II.”—Irina Livezeanu, Slavic Review

“This well-researched and scrupulous account is not only a significant contribution to Holocaust history, but also to the broader understanding of extremist nationalism and of the Antonescu regime.”—Stanley G. Payne, International History Review

“This is a major study that will influence how all of us think about the Holocaust in Eastern Europe.”—Norman Naimark, Stanford University

“Solonari’s monograph is a book that any scholar would be proud to have written, and I expect it to have a serious impact both in Holocaust studies and in the history of modern East Central Europe.”—John-Paul Himka, University of Alberta

“Purifying the Nation is an exceptionally significant contribution to one of the least explored and most tragic chapters of the twentieth century.”—Vladimir Tismaneanu, University of Maryland

“This book is genuinely monumental … the most historically sensitive and conceptually savvy account of the Holocaust in Romania yet to be produced.”—Charles King, Georgetown University