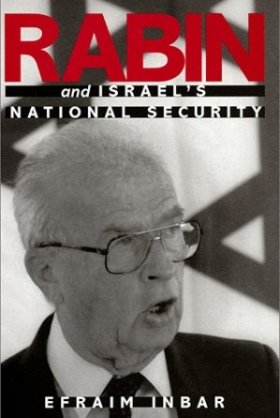 For more than forty years, Yitzhak Rabin played a critical role in shaping Israeli national security policy and military doctrine. He began as a soldier in the Palmach, the elite underground unit of the Jewish community in Palestine, served in the 1948 War of Independence, and ultimately became chief of staff of the Israel Defense Force (IDF), defense minister in several governments, ambassador to the United States, and, twice, prime minister. As chief of staff, Rabin led the IDF to its triumph in the 1967 Six Day War. He was assassinated in 1995 as prime minister as he left a peace rally.

Drawing on unpublished materials and interviews with important sources, including Rabin himself, Efraim Inbar’s work offers a systematic study of Rabin’s strategic thinking and his policies. Topics include the evolution of Rabin’s thinking, his contributions to IDF military buildup, his stress on Israel’s relationship to the United States, his attitudes toward the use of force, and his approach to Israel’s nuclear status in the Middle East. Inbar’s conclusion evaluates Rabin’s contribution to Israel’s national security and assesses Rabin’s personal transition from warrior to peace maker. Because of Rabin’s crucial role in Israel’s defense establishment at important junctures in its history, this book provides an important view into the security challenges Israel has faced and how the country has responded over four decades.

Efraim Inbar is an associate professor of political studies at Bar-Ilan University and director of its Begin-Sadat Center for Strategic Studies. He is the author of War and Peace in Israeli Politics: Labor Party Positions on National Security and Outcast States in the World Community.

1. The Approach to International Politics and the Arab-Israeli Conflict

4. The Use of Military Force

6. Rabin of the 1990s: The Changing Strategic Assessment Conclusion

“Specialists would undoubtedly regard this book’s publication as providing the definitive work of scholarship and interpretation of Yitzhak Rabin’s historic role in the evolution of Israel’s national security doctrines and practices. Its best features include meticulous, exhaustively thorough research, clear organization, and a straightforward prose style blessedly free from military or political science jargon.”—Samuel W. Lewis, former Ambassador of the United States to Israel

“Inbar has succeeded not only in documenting Rabin’s views, but also Israel’s security policy.”—Jerusalem Post

“A sober book that respects its subject while avoiding hagiography and polemic.”—Daniel Lieberfeld, International Journal of Middle East Studies

“Succeeds in capturing the complexity and evolution of Rabin’s strategic thinking.… An insightful work.”—Rolin Mainuddin, Perspectives on Political Science