Race: The History of an Idea in the West 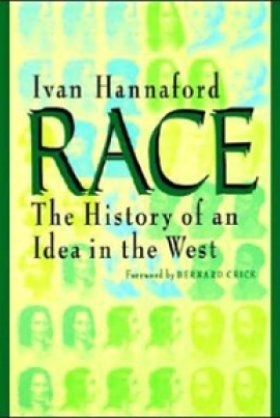 In Race: The History of an Idea in the West, Ivan Hannaford guides readers through a dangerous engagement with an idea that so permeates Western thinking that we expect to find it, active or dormant, as an organizing principle in all societies. But as Hannaford shows, race is not a universal idea--not even in the West. It is an idea with a definite pedigree, and Hannaford traces that confused pedigree from Hesiod to the Holocaust and beyond.

Hannaford begins by examining the ideas of race supposedly held in the ancient world, contrasting them with the complex social, philosophical, political, and scientific ideas actually held at the time. Through the medieval, Renaissance, and early modern periods, he critically examines precursors in history, science, and philosophy. Hannaford distinguishes those cultures’ ideas of social inclusion, rank, and role from modern ones based on race. But he also finds the first traces of modern ideas of race in the protosciences of late medieval cabalism and hermeticism. Following that trail forward, he describes the establishment of modern scientific and philosophical notions of race in the nineteenth and twentieth centuries and shows how those notions became popular and pervasive, even among those who claim to be nonracist.

Ivan Hannaford (1931–1996) was assistant director for academic affairs at Kingston University in England until his retirement in 1991. He was also a visiting fellow of Wolfson College, Cambridge, and a guest scholar at the Woodrow Wilson International Center for Scholars.

I. Western History and Thought before Race
1. In the Beginning
2. The Ancient World
3. Transitions from Greece to Rome
4. Jews, Christians, Moors, and Barbarians
5. Monsters and the Occult
6. New Methods, New Worlds, and the Search for Origins

“A remarkable achievement, and one of the most important books ever published on this subject.”—Stephen Howe, New Statesman

“In a sweeping and ambitious survey of the concept of race from the ancient world to the 20th century, Ivan Hannaford argues that the modern notion of the term is misconstrued.”—Times Educational Supplement

“This book, the life’s work of its late author, Ivan Hannaford, sets out to trace the development of the concept of race—how and when it evolved—as we understand it today in western civilization.… The work is enormously learned, quoting liberally from authors spanning 2,500 years and packed with insightful and nuanced readings.”—David M. Goldenberg, International Journal of the Classical Tradition