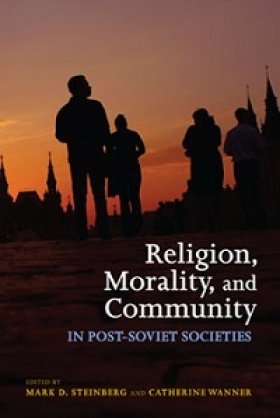 In the post-Soviet environment of expanded civil freedom with great everyday uncertainty, unhappiness, injustice, and suffering, religious organizations and beliefs in Russia and Eurasia face numerous opportunities and intense challenges. Based on recent research and interdisciplinary methodologies, this volume examines how religious organizations and individuals engage the changing and troubled environment in which they live. The contributions investigate not just Russian Orthodoxy, but also Old Belief, Judaism, Islam, Buriat shamanism, and Catholicism. Among the important questions considered are how religion addresses problems of charity, memory, justice, community, morality, nationalism, democracy, and civil liberties.

Mark D. Steinberg is Professor of History at the University of Illinois at Urbana-Champaign and editor of Slavic Review. He is editor (with Heather J. Coleman) of Sacred Stories: Religion and Spirituality in Modern Russia (IUP, 2007). Catherine Wanner is Associate Professor of History and Religious Studies at the Pennsylvania State University and is author of Communities of the Converted: Ukrainians and Global Evangelism.

Introduction: Reclaiming the Sacred After Communism

1. To Save the World or to Renounce It: Modes of Moral Action in Russian Orthodoxy
Scott Kenworthy

2. The Freezing of Historical Memory? The Post-Soviet Russian Orthodox Church and the Council of 1917
Irina Papkova

5. Communities of Mourning: Mountain Jewish Laments in Azerbaijan and on the Internet
Sascha Goluboff

“The authors contribute fresh field, archival, and literature research, updating aspects of the nexus of religion and politics in the post-Soviet region.… The scholarship is impressive.”—Marjorie Balzer, Georgetown University

“The chapters in this volume represent the ‘leading edge’ of research in the field.”—Serhii Plokhii, University of Alberta

“The essays are sympathetic and insightful analyses, from the perspectives of their disciplines. One can learn…about the role of religion in shaping the ethos of societies where the dominant ideology has broken down.”—Missiology: An International Review

“Each of the contributions provides interesting reading and a vivid description of religion and morality in post-Soviet transition, through the prism of Soviet legacies (state atheism and Soviet modernity), transition to capitalism, expansive nationalism and increased globalisation.”—Alexander Tymczuk, Europe-Asia Studies

“I regard the book as a highly important contribution to postsocialist studies and, due to its impressive comparative range, to the anthropology of religion as well, and it engages with a topic that is of paramount importance for understanding Russia, past and present.”—Slavic Review

“Social scientists have been devoting more attention to the topic of religion in recent years, and this volume represents an important interdisciplinary contribution to this area of study.… [The essays] present a variety of thoughtfully researched and illuminating stories about the ways that religion is embedded into social life in the former Soviet Union.”—The Russian Review

“[T]his volume makes a very timely and well researched contribution to the discussion of religion and politics in the former Soviet Union.”—The Slavonic and East European Review