Rock and Roll in the Rocket City: The West, Identity, and Ideology in Soviet Dniepropetrovsk, 1960-1985 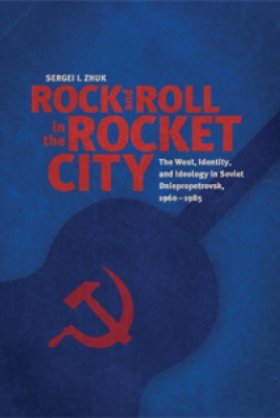 By Sergei I. Zhuk

How did rock music and other products of Western culture come to pervade youth culture in Brezhnev-era Dniepropetrovsk, a Ukrainian city essentially closed to outsiders and heavily policed by the KGB? In Rock and Roll in the Rocket City, Sergei I. Zhuk assesses the impact of Westernization on the city’s youth, examining the degree to which the consumption of Western music, movies, and literature ultimately challenged the ideological control maintained by state officials. One among many of his stories is how the rock opera Jesus Christ Superstar led Dniepropetrovsk’s young people to embrace not just one, but two Soviet taboos: rock music and Christianity.

This book is the first historical study—in any language—of the everyday lives of Soviet urban youth during the Brezhnev era. A longtime student and resident of Dniepropetrovsk, Zhuk began research for this project in the 1990s. Weaving together diaries, interviews, oral histories, and KGB and party archival documents, he provides a vivid account of how Soviet cultural repression and unrest during the Brezhnev period laid the groundwork for a resurgent Ukrainian nationalism in the 1980s. In so doing, he demonstrates the influence of Western cultural consumption on the formation of a post-Soviet national identity.

Sergei Zhuk is an associate professor of history at Ball State University, and was a Title VIII-Supported Research Scholar at the Kennan Institute. He is the author of Russia’s Lost Reformation: Peasants, Millennialism, and Radical Sects in Southern Russia and Ukraine, 1830–1917, also published by the Woodrow Wilson Center Press and Johns Hopkins.

Rock and Roll in the Rocket City was discussed at the Wilson Center on October 18, 2010.

Introduction: Back in the USSR—The “Glory Days” of Late Socialism, Fascination with the West, Identities, and Scholar
1. The Closed Rocket City of Dniepropetrovsk

Part I. The “Beating” 1960s: From the Khrushchev Thaw to the Brezhnev Doctrine
2. Anti-Soviet Crimes, Poetry, and Problematic Nationalism,1960–1968
3. The Campaign against the Novel Sobor and the End of the National Literary Revival
4. The First Wave of Music from the West: The Consumption of Jazz
5. Beatlemania, Shocking Blue, and the Ukrainian Cossacks
6. Sources of Rock Music Consumption

Part II. The Hard-Rocking 1970s: The Beginning of Mass Westernization
7. Western Adventure Stories and Ukrainian Historical Novels: Problems of the Homogenization of Soviet Culture
8. Crimes from the West: Westerns, the Mafia, and Crime Films
9. Idiocy and Historical Romance from the West: Comedy and Historical Films
10. The Democratization of Rock Music Consumption
11. Popular Religiosity in the Dniepropetrovsk Region: Cultural Consumption and Religion

Conclusion: “Between Moscow and L’viv”—The Closed City as an Ideological Failure of Late Socialism

Appendix: The Methodology for the Interviews
Notes
Selected Bibliography

“Sergei Zhuk’s illumination of youth culture in a provincial and closed Ukrainian city draws on a fascinating breadth of sources—archival documents, diaries, oral histories, and KGB intelligence. Zhuk shows how, despite the efforts of ideological officials and the paranoia of the KGB, the Soviet state fought a losing battle of accommodation and compromise against Western cultural influences. These influences, however, served to bolster as much as undermine Soviet ideology. Zhuk reconfigures Brezhnev-era society to reveal a more contradictory and multifaceted history than one usually encounters.”—Kate Brown, University of Maryland, Baltimore County

“This book is a rich read that pairs depth of analysis to an accurate measure of anecdote, and which succeeds in keeping a critical distance to a subject that clearly lies close to the personal affection of the author.”—Thunnis van Oort, European Review of History: Revue europeenne d'histoire

“Rock and Roll in the Rocket City is crammed with food for thought and should provoke many productive conversations in the field of Soviet history and beyond.”—Kristin Roth-Ey, Slavic Review

“Zhuk gives us a fascinating insight into Dnipropetrovsk under Soviet rule and provides a comprehensive background to amny of the personalities and events that took place in the first two decades of Ukrainian independence. Rock and Roll in the Rocket City should be included in every course taught on twentieth-century Ukraine.”—Taras Kuzio, Slavonic and East European Review

“Serious and highly original study, the most complete to date of Western influence in a provincial city of the former Soviet Union.”—Donald J. Raleigh, Journal of Modern History

“Zhuk’s excellent monograph makes a signal contribution in teasing out the complexities, ambiguities, and contradictions of official policy toward ‘western’ cultural influence from the 1960s to the mid-1980s…. this book … should be lauded for taking a major step forward in the study of popular culture in the late Soviet Union.”—Gleb Tsipursky, Journal of Social History

“Sergei I. Zhuk’s nuanced study offers a welcome addition to the growing literature on what used to be regarded as an unvariegated era of Soviet history.”—Amy Nelson, American Historical Review

“Zhuk has written a fascinating insight … The book provides the necessary background for many of the personalities and events that took place in the first two decades of Ukrainian independence.”—Taras Kuzio, Ukraine Analyst

“There have been worthy studies of rock music in the Soviet Union in the past, but what distinguishes Zhuk’s account is the breadth of material he has been able to assemble in documenting the deep roots that the rock culture sunk into the society of ‘developed socialism’… Zhuk’s innovative book, Rock and Roll in the Rocket City, opens up a new field of inquiry, one that raises fundamental questions about what we really know about how the Soviet Union worked.”—Peter Rutland, Transitions Online

“[Zhuk] makes his case convincingly in his thoroughly researched and well-organized study of western cultural influences during his youth in his home city.”—James von Geldern, Russian History