Stalin and Togliatti: Italy and the Origins of the Cold War 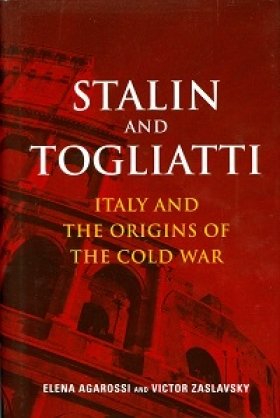 Stalin and Togliatti reveals the dependence of the Italian Communist Party on Soviet decisionmaking in the early Cold War and the willingness of Stalin to sacrifice the interests of the Italian Communist Party to Soviet foreign interests. It explores the connection between the domestic Italian politics and the international affairs during the final phases of the Second World War and in the first years of the Cold War.

The authors employ previously classified documents in Russian and Italian archives, including reports to Stalin on the virtually daily meetings of Palmiro Togliatti, head of the Italian Communist Party, with Soviet diplomats. This recent, post-revisionist scholarship underscores the role of Stalin’s ambitions and their incompatibility with liberal-democratic systems in the development of the Cold War. Stalin and Togliatti come out as shrewd politicians, implacable enemies of the capitalist West, yet acutely aware of the limits of their power.

Stalin and Togliatti is a translation and expansion of a prizewinning book published in Italian in 1997 and updated in 2007.

Elena Agarossi is Professor of Contemporary History at the Scuola Superiore di Pubblica Amministrazione in Rome and member of the Wilson Center European Alumni Association. Victor Zaslavsky, who died late in 2009, was Professor of Political Sociology at the Free International University for Social Sciences in Rome.

1. The Soviet Union under Stalin and the International Communist Movement

3. The Italian Communist Party: A Party of Government and of Opposition

4. The Italian Communist Party, Italian Foreign Policy, and the Problem of Trieste

5. The Italian Communist Party and Italian Prisoners of War in the USSR

6. The Roots of Communist Autarchy and the Rejection of the Marshall Plan

7. From Collaboration to Confrontation

8. Armed Insurrection and the 1948 Elections

“The book has a sense of history in the making: it combines at times gripping narrative with sober synopses of complicated and controversial policies.”—Carl Levy, Department of Politics, University of London

“The scholarship that went into this work is analytically excellent and rigorous, and superior to anything that exists on the connections between Italian communists and Moscow in the English-language historiography.”—Vladislav Zubok, Temple University

“The book’s merits include putting the Italian story fully within the context of the Cold War, describing in detail the behind-the-scenes maneuvering to mask Palmiro Togliatti’s true intentions, clarifying questions of Italian communist policy that have been debated in the past, and illustrating Antonio Gramsci’s cultural ‘hegemony’ in action.”—Spencer Scala, Slavic Review

“The revision and translation of a much-debated study that was published in two Italian editions in 1997 and 2007, this volume represents the life achievement of two influential historians of Cold War Italy…. [M]eticulous research.”—Dario Gaggio, Journal of Modern History

“Agarossi and Zaslavsky fill in details on Togliatti’s relations with Stalin during the early years of the Cold War…. The authors convincingly show how subservient Togliatti was to the USSR in the late 1940s and early 1950s.”—Alexander De Grand, The Historian