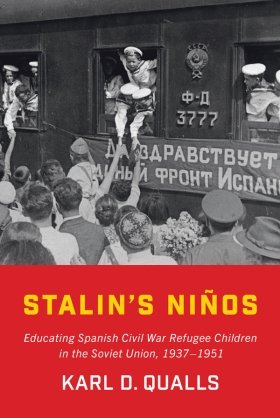 Stalin’s Niños examines how the Soviet Union raised and educated nearly 3,000 child refugees of the Spanish Civil War. An analysis of the archival record and numerous letters, oral histories, and memoirs reveals that this little-known story exemplifies the Soviet transformation of children into future builders of communism and illuminates the educational techniques shared with other modern states. Classroom education taught patriotism for the two homelands and the importance of emulating Spanish and Soviet heroes, scientists, soldiers, and artists. Extra-curricular clubs and activities reinforced classroom experiences and helped discipline the mind, body, and behaviors. Adult mentors, like the heroes studied in the classroom, provided models to emulate and became the tangible expression of the ideal Spaniard and Soviet. The Basque and Spanish children thus were transformed into hybrid Hispano-Soviets fully engaged with their native language, culture, and traditions while also imbued with Russian language and culture and Soviet ideals of hard work, comradery, internationalism, and sacrifice for ideals and others.

Even during their horrific evacuation to the Soviet interior during World War II, the twenty-two Soviet boarding schools designed specifically for the Spanish refugee children – and better provisioned than those for Soviet children – served these displaced niños for fourteen years and transformed them into Red Army heroes, award-winning Soviet athletes and artists, successful educators and workers, and aids to Fidel Castro in building Cuba after his revolution. Stalin’s Niños also sheds new light on the education of non-Russian Soviet and international students and the process of constructing a supranational Soviet identity.