Strategies of Dominance: The Misdirection of U.S. Foreign Policy 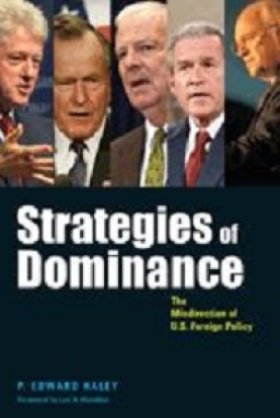 In a critical overview of U.S. foreign policy since the end of the Cold War, P. Edward Haley draws surprising connections between key elements of George W. Bush’s foreign policy and those of his predecessor, Bill Clinton. Haley further shows how these elements in both cases produced disastrous results, and he proposes an alternative that is constructive and tolerant but not amorally “realistic.”

Specifically, Strategies of Dominance faults reliance on American exceptionalism, treatment of globalization and global democratization as vital to security, a misreading of American primacy, expectation of bandwagoning by allies, and reliance on economic sanctions and coercive diplomacy. Haley argues that these characteristics have replaced a more tolerant Cold War–era program in which such attitudes were tempered by recognition of a bipolar world, a nuclear standoff, and a global zero-sum competition for allies and influence.

P. Edward Haley holds the W. M. Keck Foundation Chair of International Strategic Studies at Claremont McKenna College, where he served as acting director of the Center for the Study of the Holocaust, Genocide, and Human Rights in 2004–5. He was a public policy scholar at the Woodrow Wilson International Center for Scholars in 2004.

1. Bush I and the New World Order

2. Moses and the Promised Land

5. George W. Bush and the World

“The basic theme is important and valid, Haley has gathered a lot of good material, and the concluding chapter is excellent.”—Avis Bohlen, former Assistant Secretary of State for Arms Control, U.S. Department of State

“A stimulating analytical framework that foretells whether American foreign policy is headed for a significant shift by examining the patterns of recent policy-making paradigms.”—Patrick Shea, Political Studies Review