The Great Game, 1856–1907: Russo-British Relations in Central and East Asia 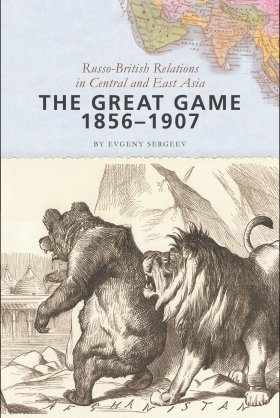 The Great Game, 1856–1907 presents a new view of the British-Russian competition for dominance in Central Asia in the second half of the nineteenth century. Evgeny Sergeev offers a complex and novel point of view by synthesizing official collections of documents, parliamentary papers, political pamphlets, memoirs, contemporary journalism, and guidebooks from unpublished and less studied primary sources in Russian, British, Indian, Georgian, Uzbek, and Turkmen archives. His efforts amplify our knowledge of Russia by considering the important influences of local Asian powers.

Ultimately, this book disputes the characterization of the Great Game as a proto–Cold War between East and West. By relating it to other regional actors, Sergeev creates a more accurate view of the game's impact on later wars and on the shape of post–World War I Asia.

Evgeny Sergeev is a professor of history and head of the Twentieth Century: Socio-Political and Economic Problems Center at the Russian Academy of Sciences Institute of World History. He is author of Russian Military Intelligence in the War with Japan, 1904–05: Secret Operations on Land and at Sea. He was a scholar with the Wilson Center’s Kennan Institute in 2006.

1. The Prologue of the Great Game

Epilogue: Reverberations of the Great Game

Appendix: A Nominal Roll of the Rulers, Statesmen, Diplomats, and Military Officers Engaged in the Great Game, 1856–1907

“An important contribution to the field and offers valuable insights into its complexities. Subsequent examinations of this topic will have to contend with Sergeev’s recontextualization of the Great Game.”—Eugene Edward Beiriger, Diplomacy and Statecraft

“[Sergeev] is able to move beyond the Game to its players, to the architects of strategy. The reader is at the table with senior policy-makers, listening to them balance possibilities and practicalities within the structures of shifting relations between Russia and Britain.”—Peter Skinner, Foreword Reviews

“A monumental and readable assessment of the Great Game that makes the Russian side clearly intelligible in relation to the British.”—Wm. Roger Louis, University of Texas at Austin.

“Sergeev is evenhanded in his definition of the game, in his delineation of its stages, and in his ability to view the game in its full context. It is unlikely that any other scholar of the Great Game displays Sergeev’s virtuosity with primary sources across several languages and from diverse archives.”—Bruce W. Menning, U.S. Army Command and General Staff College.