The Soviet Union and the June 1967 Six Day War 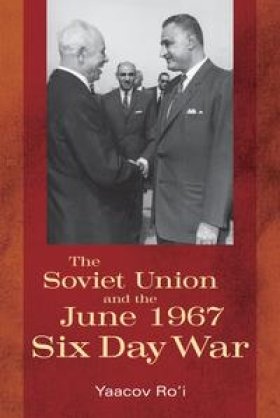 Why did the Soviet Union spark war in 1967 between Israel and the Arab states by falsely informing Syria and Egypt that Israel was massing troops on the Syrian border? Based on newly available archival sources, The Soviet Union and the June 1967 Six Day War answers this controversial question more fully than ever before. Directly opposing the thesis of the recently published Foxbats over Dimona by Isabella Ginor and Gideon Remez, the contributors to this volume argue that Moscow had absolutely no intention of starting a war. The Soviet Union’s reason for involvement in the region had more to do with enhancing its own status as a Cold War power than any desire for particular outcomes for Syria and Egypt.

In addition to assessing Soviet involvement in the June 1967 Arab-Israeli Six Day War, this book covers the USSR’s relations with Syria and Egypt, Soviet aims, U.S. and Israeli perceptions of Soviet involvement, Soviet intervention in the Egyptian-Israeli War of Attrition (1969–70), and the impact of the conflicts on Soviet-Jewish attitudes. This book as a whole demonstrates how the Soviet Union’s actions gave little consideration to the long- or mid-term consequences of their policy, and how firing the first shot compelled them to react to events.

1. Soviet Policy toward the Six Day War through the Prism of Moscow’s Relations with Egypt and Syria
Yaacov Ro’i

2. The Outbreak of the June 1967 War in Light of Soviet Documentation
Boris Morozov

3. A Paper Bear: Similarities and Contrasts in Soviet Involvement in the 1956 and 1967 Wars
Yair Even

4. American Perceptions of the Soviet Threat before and during the Six Day War
Jeremi Suri

5. The Israeli Evaluation of the Soviet Position on the Eve of the Six Day War
Shaul Shay

6. The Soviet Naval Presence in the Mediterranean at the Time of the Six Day War
Mikhail Monakov

7. Eastern Europe and the Six Day War: The Case of Bulgaria
Jordan Baev

“This volume is the most authoritative study yet to appear on the Soviet Union’s attitude toward and involvement with the 1967 Six Day War. Based on Soviet and East European documents, the volume comprises a set of analyses by…highly knowledgeable and astute researchers working under the exacting and skillful editorship of experts Yaacov Ro’i and Boris Morozov. … it contains solid scholarship that honestly and critically weighs all the available and documented evidence. It should become the classic work on the Soviet Union and the 1967 war.”—Galia Golan, Journal of Cold War Studies

“No doubt, [this] is so far the most authoritative study of the Six Day War through the prism of the Soviet Union. The editors of and contributors to this volume are to be congratulated for producing an outstanding scholarly work.”—Middle Eastern Studies

“Good old-fashioned diplomatic history. This book’s value lies in its thorough regard for facts and its refusal to engage in a lot of idle speculation about motives that cannot be supported by evidence.”—William Quandt, University of Virginia