The Mind of Osama Bin Laden

Peter Bergen author of "The Osama Bi Laden I Know"

Osama bin Laden remains at the center of the war on terrorism. Yet very little has been produced in the way of comprehensive and detailed analysis of his motives or the evolution of his terrorist mission. Peter Bergen, a prominent CNN analyst of international terrorism has sought to provide a detailed analysis of bin Laden as seen by those who know him in his latest book, "The Osama bin Laden I Know." This program is based upon the accounts given in that book. 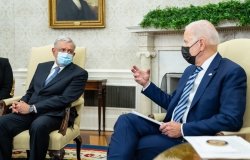 Article
Energy
An Elephant In The Room At The North American Leaders' Summit
By Montserrat Ramiro on November 22, 2021
Article
Wilson Center Statement on Memorial International
November 22, 2021