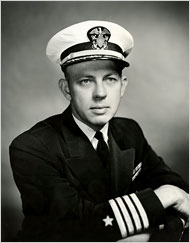 Edwin Kintner (1920-2010) was a distinguished nuclear engineer and senior staff member of the U.S. Atomic Energy Commission (AEC) through the 1960s and 70s who participated in at least two U.S. inspection teams sent to the Dimona nuclear facility.  In this interview, Kintner recounts how thoroughly he and his partners searched the Dimona site for evidence of plutonium reprocessing activities and expresses shock upon learning that he and his team had been fooled all along.

Kintner graduated from the United States Naval Academy in Annapolis in 1941 and subsequently earned a series of Master’s degrees in naval construction, ocean engineering, and physics at the Massachusetts Institute of Technology. After World War II, Kintner was selected by Vice Admiral Hyman G. Rickover to serve on a secret Navy team that developed the experimental reactor used in the first nuclear-powered submarine, the Nautilus.

After he retired from the Navy in the early 1960s, Kintner had a distinguished career in the public sector, serving on the senior staff of the U.S. Atomic Energy Commission (AEC) and later as the head of the Department of Energy’s fusion program, where he oversaw the construction of reactors and the development of nuclear power as an alternate source of energy.

His scientific role at the AEC led to his involvement in the Israeli nuclear program.  On at least two occasions between 1968 and 1969, Kintner was member of the U.S. inspection teams sent to Israel to ascertain the nature of the Israeli nuclear reactor at Dimona. During the inspection process, he earned a reputation as a no-nonsense inspector.

In 1983, Kintner was appointed the executive vice president of General Public Utilities Nuclear Corporation, which owns the Three Mile Island nuclear power plant.  In his capacity as executive vice president, Kintner oversaw the remaining cleanup of the damaged reactor and worked to standardize nuclear reactor training and operations. In 1990, Kintner was inducted to the National Academy of Engineering.

This telephone interview with Edwin (“Ed”) Kintner took place sometime between 1993 and 1994. Dr. Marvin Miller, my colleague at MIT in those days, was the principal interviewer.  Kintner was then in his mid-70s.  Throughout the interview he appeared focused, sharp and with good memory.

We knew (via declassified documents) that Ed Kintner visited the Dimona nuclear facility—the home of Israel’s nuclear infrastructure—at least twice, possibly more, as a member of various U.S. Atomic Energy Commission (AEC) teams led by Floyd Culler.[1]  I also knew that the Israelis considerd Kitner as the toughest inspector on the team. Dr. Israel Dostrovsky, then director-general of the Israeli Atomic Energy Commission (IAEC), even confided to me once that he viewed Kintner as the most "dangerous" person on the American inspection team. Evidently, they were fearful that Kintner’s thoroughness and persistence could compromise the biggest secret of Dimona: the underground reprocessing plant.

By the time of the interview, both Vanunu’s revelations in the London’s Sunday Times (1986) and Hersh’s The Samson Option (1991) were already out. We assumed that Kintner must have heard something about it, so we were interested to see how he would reconcile current knowledge with the team’s findings and conclusions at the time of the inspection. We were curious to hear his reactions to those subsequent disclosures, in particular, whether and to what extent they suspected the Israelis had secret facilities and, if not, why the team failed to detect any signs of Israeli deception. Or maybe, we wondered, the team had its own suspicions about what the Israelis were doing but higher officials in the United States government intervened politically to suppress or soften those suspicions.

We were not prepared for Kintner’s actual reactions; he surprised us on two levels.  First, we were surprised to realize that he knew nothing about the Vanunu or the Hersh disclosures.  Second, we were both astonished and puzzled by the intensity of his disbelief when we shared the testimonies with him.  When we told him that Israel had constructed and built a large reprocessing plant at Dimona from the very start, he responded with one word: “bullshit.” He had difficulty accepting that such an extensive facility was there all along, that he and his fellow scientists were duped.

As Kintner put it in the interview, “we covered that site well enough to know... to see... unless there was really some unusual circumstance, like it is buried 1000 feet underground.” And when we told him that this is exactly what the Israelis had done, i.e., they had dug the reprocessing plant deep underground and camouflaged it, Kintner still had difficulties believing it. He thought that it was extremely unlikely that he and his colleagues, backed up by the CIA and the rest of the American intelligence community, were all duped by the Israelis.  As he put it, “...let me just tell you that we were... looking for every piece of evidence that we could find... about this sort of thing happening, being hidden or being camouflaged or whatever. And as I said, the CIA had been taking photographs of that, overhead photographs, for years, week after week after week, looking at every bit of construction and, you know, watching how it was developed from one point to another. So the thing would have to been hidden from that as well, even as it was being built. None of that says it couldn’t have been done. All it says to me is that it is a miracle if it was.”

It appears that Kintner and his team were duped twice: once by the Israelis and once more by the U.S. intelligence agencies that did not share all they knew with the visiting team. In retrospect, it may be that the true function of the visiting technical teams was more political than technical, unbenknownst to the inspectors. In a sense, the teams had to be duped about their real function and purpose. Their job was not to verify that what the Israelis were saying was true, but rather they were to be the technical fig leaf for the political facade that Israel was not crossing the nuclear threshold.

[1] Floyd Culler served as Acting Director of Oak Ridge National Laboratory in 1972, assistant and later associate director for nuclear technology in 1964, and as its deputy director from 1970 to 1977. A chemical engineer by training, and an expert on chemical reprocessing of nuclear fuels, Culler visited Dimona four times as a member and leader of the American inspection team (1965-68). For background on the political arrangement that led to those U.S. inspection visits at Dimona and on the way those visits were actually conducted see Israel and the Bomb pp., 153-94.