Brazil is home to a vast maritime region, from the waters of the Amazon River to the country’s nearly 8,000 km of Atlantic coast. These areas play a central role in the Brazilian economy—from international trade to the deep water pre-salt oil reserves—but are also integral to Brazil’s culture and national identity. The Brazilian Navy is the entity tasked with ensuring the safe navigation and use of this vast maritime expanse. A multipurpose force, the Brazilian Navy must be present in the most distant reaches of the country, charged with defense as well as other constabulary activities, as prescribed by law and the Brazilian Constitution.

In order to become an institution capable of fulfilling the nation's aspirations, the Brazilian Navy relies on cooperation with the naval forces of Brazil’s allies and partners. The U.S. Navy has proved a constant partner in this regard, from the early days of the Brazilian Fleet to the present.

On September 25, 2018, the Wilson Center’s Brazil Institute hosted a presentation by the Commander of the Brazilian Navy, Admiral Eduardo Bacellar Leal Ferreira, on the Brazilian Navy’s efforts to accomplish this wide range of responsibilities in Brazil’s vast territory and adjacent maritime area.

A former instructor of Seamanship and Navigation at the United States Naval Academy in Annapolis, Admiral Leal Ferreira was one of the senior officers who greeted U.S. Defense Secretary James Mattis during his recent visit to Brasilia and Rio de Janeiro. Admiral Leal Ferreira will be in the United States for the week-long Sea Power Symposium, a global meeting of naval chiefs to take place in Rhode Island later this month. 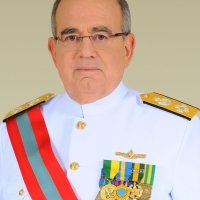