AMLO and the Outlook for North American Free Trade

After thirteen months of intense negotiations, the United States, Mexico and Canada announced they had reached a new trade deal on September 30, 2018. The United States-Mexico-Canada Agreement, or USMCA, is set to replace the 25-year-old North American Free Trade Agreement.

Prior to his position as Chief NAFTA Negotiator, Jesus Seade was Vice-President of two leading universities in Hong Kong and China and was a member of the Advisory Board of the Ministers of Trade and Financial Services in Hong Kong. He is a former Ambassador to the General Agreement on Tariffs and Trade (GATT) and served as Deputy Director General of the World Trade Organization (WTO). He has also been a senior adviser to the International Monetary Fund (IMF), the World Bank, and the WTO in Geneva. Seade is the author of several influential publications on public finance, market structure, and international trade. He holds a Bacherlor's Degree in Chemical Engineering from the National Autonomous University of Mexico (UNAM) and a Ph.D. in Economics from the University of Oxford.

“My mandate was [to] support the process, don’t create problems. If there is an issue where you don’t quite agree, it has to be a very serious concern before you open the issue, before you create the problem. You will intervene only when you can help, not hinder.”  “In my reading, every free trade agreement consists of two parts: one is one sentence that says, ‘Hereby, we create free trade.’ The other is a thousand pages explaining, ‘not quite,’ all the blocks and limitations to free trade.” “We had to have an awful week of exploration of alternatives and how to say it. It was what I call my darkest week, without any doubt. For a couple of days, I woke up in the morning shaking – straight from sleep to shaking, feeling that the country was falling apart and it was my fault because I’m not finding a way to bring things together.” “[When] the walls around North America rise a little bit, now Mexico, as the cost-effective, emerging market economy in that group, next to the big economical United States, has a competitive advantage created artificially by the situation, compared to Germany or Korea or China or Brazil. Commercially, there is a benefit.” 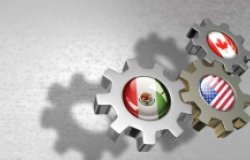 Article
Migration
Rhetoric Meets Reality at the U.S.-Mexico Border: Immigration and NAFTA in a New Era of Bilateral Relations
By Christopher Wilson on August 3, 2018 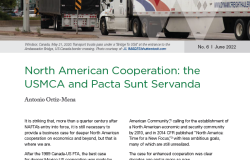