Book Launch -- <i>A Continent for the Taking: The Tragedy and Hope of Africa</i>

A Roundtable discussion with Howard French, distinguished New York Times journalist and author of the recently published book A Continent for the Taking: The Tragedy and Hope of Africa. Historian Louis Gates, Jr. has described French's book as "A brilliant and nuanced meditation on the complexities of contemporary Africa. Essential reading for those of us who love Africa and for all those who wish to gain a fuller understanding of a continent that is sprawling, mysterious, and endlessly fascinating."

Book Launch -- <i>A Continent for the Taking: The Tragedy and Hope of Africa</i>

Howard French's recent book was the subject of a spirited discussion that combined elements of Mr. French's personal experiences as a journalist in various regions of the continent, particularly in Congo-Kinshasa, with a broader analysis of some of the most dramatic successes and failures that the continent has witnessed over the past two decades. The panelists focused on the role that the U.S. has played, for good and for ill, in democratization and development, and its potential contributions. Topics ranged from critiques of specific decisions made under the Clinton Administration, especially surrounding Laurent Kabila's rise to power in Kinshasa, to the grave institutional flaws that hamper effective Africa policymaking in Washington today.

After introductions, Mr. French began with a brief presentation in which he described the development of his own relationship with Africa as a young man, the traumatic effect of the bloody war in the Congo on him, and the persistent problems that he sees in decision-making with regard to U.S. policy in Africa. He observes that African lives are not considered as valuable as lives in other regions, resulting in the fact that humanitarian catastrophes are viewed as somehow endemic and do not garner as much attention as elsewhere. This is compounded by the perception that the problems that face Africa are solely due to poor leadership and have little to do with the actions of the West.

Gayle Smith responded by praising Mr. French's insights, as well as his ability to add a nuanced human element to the events that he writes about, without creating a caricature of his subject. She then accused much of the mainstream media coverage of the continent as being either overly sensational or resorting to picturesque exoticism. She added her own take on some of Mr. French's criticisms of U.S. foreign policy in Africa, citing the need to integrate African policy into wider U.S. foreign policy, and not treat it as a marginal concern. She also called for the U.S. to make a serious investment of both money and energy in order to develop a coherent foreign policy there.

Following Ms. Smith's comments, Mr. French suggested that there has been a remarkable consistency in U.S. Africa policy, spanning the Clinton and both Bush administrations; America wants access to African commodities, but only "on the cheap." He related this both to policymaking institutions in Washington as well as U.S. financial support for projects in the region. As an extension of this, U.S. leaders have been willing to enter into easy relationships with any African leaders who promise stability, rather than take a closer look at the governments they deal with, simply for reasons of expedience. He cited Madeleine Albright's embrace of Laurent Kabila as an example of this. Ms. Smith responded that the Clinton Administration began to make improvements, and that despite institutional flaws, incremental improvements are being made. 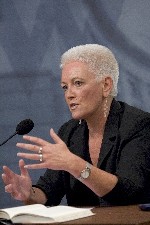 The questions period offered the panelists time to reflect and discuss a number of issues raised by the public related to Mr. French's book. Questions were predominantly centered upon how the U.S. should view Africa in relationship to itself. On this point, Mr. French offered several suggestions, including a need to see the relationship between the U.S. and Africa as a relationship between fellow nations, rather than a relationship we have with particular leaders. Mr. French also suggested that democratization should be a real goal, and that the mainstream media and American public must take the continent more seriously. He also reminded the audience that the U.S. has many concrete interests in Africa, politically, economically, strategically and morally. In Ms. Smith's responses, she struck a hopeful note, citing several examples of good leadership in Africa; she suggested that the U.S. capitalize on these positive trends and make a serious financial commitment to African development, but also to expanding the role that Africa plays in the global foreign policy community.

Dr. Wolpe concluded by reinforcing the theme that despite the joint responsibility for much of the tragedies in Africa's history, it is Africans themselves who will shape the course of the continent, and that it is the responsibility of the U.S. to enter into a genuine partnership with the continent.