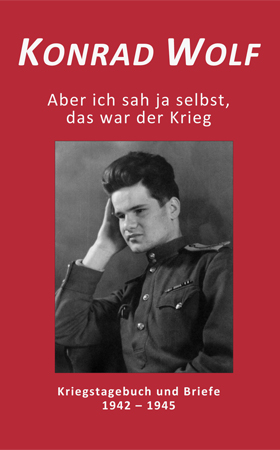 Konrad Wolf (1925-1982), renowned film director and longtime president of the East Germany’s Academy of Arts, left behind an extraordinary collection of historical documents: his War Journal. In three small notebooks of tightly written handwriting, the journal details his early years as a young man and solider enlisted in Soviet Russia’s Red Army (1943-1945). Originally written in Russian, Konrad Wolf’s Kriegstagebuch was recently published for the first time in German under the title of Konrad Wolf - Aber Ich sah ja selbst, das war der Krieg (English title: Konrad Wolf - But I Saw It Myself, This is the War: War Diary and Letters, 1942-1945), allowing readers an unique and insightful glimpse into the experiences, thoughts, and feelings of a young man, both solider and immigrant, in the midst of World War II. Konrad Wolf was the son of Dr. Friedrich Wolf, renowned German physician and political author and brother of Markus Wolf, the longtime head of East German foreign intelligence.

The editor of the collection, cultural historian Paul Werner Wagner will join the Wilson Center’s History and Public Policy Program for a lively discussion on the life and experiences of Konrad Wolf as well as what this document debut will mean for researchers and readers of World War II history.  Dr. Christian Ostermann, Director of the History and Public Policy Program, will moderate the event. Reception to follow discussion.

Paul Werner Wagner spent his childhood in East Germany. At the age of 19, he was imprisoned for a year and a half for attempting to flee the DDR. After his release, he became active in East German civil rights movements, including the “Democratic Awakening” (Demokratischer Aufbruch) of fall1989, which ultimately led to German unification in 1990. Today he works as a literary scholar, cultural manager and chess official, and is chair of the Emanuel Lasker Society, the Friedrich-Wolf-Society and the artist club Die Möwe.

PLEASE NOTE: The discussion will be both presented and moderated partially in German.