Book Launch: The Ultimate Weapon Is No Weapon: Human Security and the New Rules of War and Peace

Shannon Beebe and Mary Kaldor discuss their new book, The Ultimate Weapon is No Weapon: Human Security and the New Rules of War and Peace, in which they argue for a broader conception of human security.

Book Launch: The Ultimate Weapon Is No Weapon: Human Security and the New Rules of War and Peace

To understand the security concerns of the developing world, we must understand that lack of institutional capacity has created a "house of cards," said U.S. Army Lieutenant Colonel Shannon Beebe, speaking at the Wilson Center on October 19. "When that card gets pulled out, the house is going to fall."

Beebe, a senior Africa analyst for the Department of Defense, and Mary Kaldor, professor at the London School of Economics and Political Science, discussed their new book, The Ultimate Weapon is No Weapon: Human Security and the New Rules of War and Peace, in which they argue for a broader conception of human security. "The world is suffering from a lack of a security narrative," said Beebe.

"The ultimate weapon is not the F-22," said Kaldor, "it is a change of mindset."

"What happens when a man is already a fisherman and you take all his fish away? You create a pirate," said Beebe. The environmental and human security threat of overfishing in Somalia was not taken seriously as a security threat until it was left unchecked for 20 years and developed into a "real kinetic threat" of piracy, he said.

Beebe spent a year interviewing 80-90 Africans in 13 countries, including military leaders, academics, NGO leaders, and even Somali cabdrivers in the United States, about how they view their security. "What came back was resounding, sobering, and confusing," said Beebe. Amongst those interviewed, few expressed traditional "kinetic" security concerns stemming from physical threats. Instead it was the "conditions-based vulnerabilities" — such as poverty, health, water and sanitation, gender equality, and climate change — that were identified as primary security threats.

"Until we stop giving Africans and the developing world our definition of what is right for their security and start listening to what they are saying is relevant to their security, we are going to continue to marginalize ourselves," Beebe said.

There is currently "a profound security gap," Kaldor said, and a failure to meet the diverse needs and root causes of violence in much of the developing world. Filling the security void has been an array of both good and bad actors – NGOs, humanitarian agencies, militias, and warlords. If we do not adapt our own security strategies to fill this gap, "it will be filled by someone [else]," Beebe warned.

Human security must be incorporated into our security narrative, Beebe and Kaldor argue in their book, which means addressing the security needs of individuals and communities, not just the state. It also involves protection from violence, material deprivation, and natural disasters. They advocate for more robust global emergency forces that would act as a global national guard or police force. 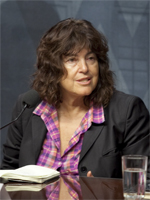 Promoting the rule of law domestically and shifting interventions "from a war paradigm to a law paradigm" is crucial, said Kaldor. Furthermore, we must change our mindset so that we value the lives of those in foreign countries as highly as we value American or European lives. "You can't bomb your own people," she said.

While human security is already being taken into account on the ground, "it is very much organic, rather than institutionalized…we understand that there is an imperative but again it is the security narrative that is lacking," said Beebe. Only by engaging with individuals and taking their needs into account with a more comprehensive security narrative can we foster lasting and sustainable security, he said.

Drafted by Hannah Marqusee and edited by Schuyler Null and Meaghan Parker.