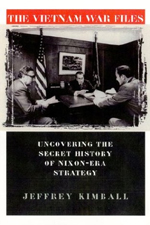 Organized by the Cold War International History Project and the Western European Studies at the Woodrow Wilson Center, the event featured Jeffrey Kimball, professor of history at University of Miami, Ohio, and author of numerous books on the Nixon Presidency. The book, Kimball explained, was the culmination of years of research in the US archives at a time when new documents, especially at the Nixon Presidential Material Projects at the National Archives were readily accessible. The wealth of newly declassified materials, prompted him to select the most important documents, or fragments of documents, in order to offer a complete picture of the Nixon Strategy to end the war in Vietnam. The book is also a continuation of Kimball's previous work on Nixon and Vietnam, Nixon's Vietnam War published in 2002. It is an undertaking to test tests the conclusions reached in his previous work, Kimball suggested, verifying if they hold true with the declassification of the new material.

The volume attempts to follow specific issues of concern in the Nixon White House in the last phases of the Vietnam War. It seeks the "truth," Kimball claimed, not in its transcendental, philosophical form—i.e. explaining the meaning of Vietnam, but rather in the more mundane, factual representation of White House policies, expectations, and hopes. This "truth" has increasingly come under attack, Kimball suggested, from both the policy side—partisan ideologues or advocated concerned with winning the argument—and the academic side—scholars who believe that factual truth is unattainable as perceptions are influenced by personality or cultural identity. History suffered as a result, Kimball concluded.

While the book is not a complete and ultimate compendium of the available materials on Nixon-Ford presidencies, it is an attempt to provide a sample of the available documentation in order to complete—and sometimes countermand—the writing of the participants. Kissinger and Nixon wrote their memoirs not as objective observers but as participants interested in safeguarding their role in history. In many cases, Kimball argued, they had constructed their theories on myths, outright lies, or misinformation. The value of the new evidence is in its ability to deconstruct some of the myths, in whole or in part.

Key issues such as ending the war in Vietnam, the mad-man theory, the decent interval, triangular diplomacy, all Nixon and Kissinger's claims of strategy are seen in a different light as new evidence come out from the Nixon NSC files and the Nixon Oval Office audiotapes. Nixon's successes were at least in great part due to fortunate coincidences of history rather than master planning in the Oval Office. The policies toward North and South Vietnam prolonged the war, Kimball argued. Maintaining US prestige in the international system and the perception of US willingness to support anti-communist regimes was just as important to Nixon—the documents suggest—as ending American involvement in Vietnam. Nixon's détente was more a coercive attempt to get the Soviet Union to acquiesce to US desires in Vietnam than about relaxing nuclear tensions between the superpowers.

In the end—Kimball concluded—Nixon and Kissinger had been successful in gaining a decent interval from having to accept the judgment of history for their actions. It allowed the debate about Vietnam to continue and gave ammunition to those who have argued that the war could have been won if only enough pressure were applied.

David Patterson, former Chief Edition or the Foreign Relations of the United States (FRUS) Series and a Vietnam War Historian, praised Kimball's document reader as a welcomed addition to the historiography of the Vietnam War. He applauded Kimball's attempts at inclusiveness, but cautioned the audience against relying exclusively on selective document readers as opposed to extensive archival research. Patterson offered a historiographical synthesis of the US Vietnam policy prior to Richard Nixon's 1968 victory, and highlighted both instances where the previous policies were continued by the Nixon administration and where they were changed.