A Briefing by The Honorable Djibrill Bassolé: Updates on the Sahel Security Situation and Presidential Elections in Mali

Foreign Minister Bassolé discussed recent developments in the Sahel and Sahara region, as well as the Ouagadougou Agreement that set the Presidential elections in Mali for July 28.

Following an introduction made by Steve McDonald who highlighted the importance played by Burkina Faso in the peace-settlement process that has occurred in Mali since the military coup of March 2012, Djibrill Bassolé opened this session by assessing the current situation in Mali and stating the goals set by President Blaise Compaoré as the designated mediator between the leaders of the coup and West African leaders. “The coup d’état had weakened the constitutional institutions of Mali and had put its territorial integrity to a severe test,” the Minister remarked. Hence, the government of Burkina Faso, together with the political bodies of Mali and the military junta, “undertook (…) action to restore and stabilize institutions of the republic through respect of constitutional order.” This process, achieved through dialogue between the Captain Amadou Haya Sanogo, the leader of the coup, and high-level African political figures, resulted in an agreement to organize elections in the near future and the appointment of Dioncounda Traoré as the interim president of Mali. 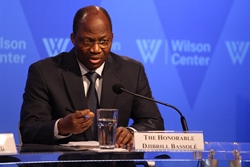 “The normalization of the security situation in northern Mali” was the second goal set by President Compaoré and the Economic Community of West African States (ECOWAS) to end the Malian crisis, explained Bassolé before giving an account of the events which took place in the North. In a region where human rights had been violated since the start of the rebellion, the provision of basic social services had virtually disappeared and insecurity fast became a feature of daily life, the situation demanded urgent remediation. The failure of the peace talks between the National Movement for the Liberation of Azawad (MNLA) and the transitional government and the subsequent progression of extremist armed groups towards Bamako led to the intervention of the French army in the region, which put a stop to this hostile advance.

A Roadmap for the Future

While the situation in northern Mali seems to have improved over the past few months and the recent negotiations between the transitional government and the junta led to the decision to set the presidential elections for July 28th, Bassolé cautioned that insecurity in northern Mali remains rife and called on the international community to reaffirm its support. “We need to help Mali to successfully hold the presidential elections on the 28th of July, to establish [authority] and [legitimate] institutions in the country,” he asserted. Furthermore, the Foreign Minister charged that “improved democratic governance [with regard to] social and economic development” across the Sahel can only be achieved by promoting cooperation with national and regional partners supported by the international community. A key challenge to security in the region will be the inclusion of the entire population in the economic, social and political aspects of decision-making in order to prevent extremist groups from inducing vulnerable members of the community into violence and terrorism.

The Need for Elections

Minister Bassolé acknowledged that he was initially in favor of delaying the elections due to the rainy season and Ramadan which could drastically reduce voter participation and  create issues of legitimacy. Nevertheless, he pointed out that peace could not be sustained by a transitional government and that the need for elections had never been stronger. As a matter of fact, only an elected government will be able to stabilize the country and conclude the peace negotiations with the junta. “The international community and all the partners should focus their efforts so that these negotiations [will] be the last ones.”

The Minister called on Malian authorities to focus on reforming the army following a twofold strategy. Firstly, by training of soldiers to ensure that they do not interfere in the political process. “A good army should have a republican spirit,” he said. Secondly, by making the army prepared to prevent and resolve security crises without the need for external intervention, which may impugn a nation’s sovereignty. “Countries should be able to do [themselves] what France did for the Sahel.”

A Marshall Plan for the Sahel?

When asked about the possibility of introducing a large investment plan financed by African governments with the support of the international community, focused on developing infrastructure and creating employment opportunities in the region to tackle poverty – one of the root causes of insecurity – Bassolé posited that the Sahel needs more than a Marshall Plan. Indeed, he highlighted that the original plan set by the United States to help Europe after WWII was aimed at rebuilding and restoring pre-existing infrastructures which had been destroyed, but that the Sahel has always lacked both. As a consequence of this, he argued that West African leaders must prepare their people for such an ambitious investment plan before implementing it.  “We need to promote national cohesion in all of countries, based on dialogue and full participation of all the communities,” he said, calling on partners to work alongside them achieve such goals.