Burundi: Prospects and Plans for 2011 and Beyond

President Pierre Nkurunziza detailed the fight to create both a political and economic environment necessary in Burundi for investment, trade, and support from the international community.

H.E. Pierre Nkurunziza, President of the Republic of Burundi discussed his initiatives to pull the country out of a troubled and restive post–conflict era and to create both a political and economic environment necessary to bolster investment, trade, and support from the international community.

A Conversation With President Nkurunziza: Burundi and the Struggle for Growth and Stability

During his recent visit to the Wilson Center, H.E. Pierre Nkurunziza, President of the Republic of Burundi, discussed efforts to pull the country out of a troubled post-conflict era. Steve McDonald, director of the Wilson Center’s Africa Program, provides additional commentary.

H.E. Pierre Nkurunziza, President of the Republic of Burundi

“Recent events of politically motivated violence in the capital of Bujumbura underline the fact that Burundi remains a fragile society, politically and socially, and the job of reconciliation and recovery is still a work in progress,” stated Michael Van Dusen, Executive Vice President and COO of the Wilson Center to open the discussion.  Further, “It is the task that President Nkurunziza … is now undertaking … looking to expand foreign investment and trade and rectify many of the inequities inherited from its colonial and violent past.  While expanding free education to all secondary school children in 2005, reaching a ceasefire with the final rebel group in 2008 and working to professionalize the national army and police forces, much remains to be done,” he continued.

Howard Wolpe, former Director of the Africa Program at the Center, gave on overview of Burundi’s recent history.  It is, he said, a country with a tragic history of cyclical violence, genocidal massacres and implacable poverty, and is still in the throes of challenges that undermine its stability and prospects for long-term development.  Despite the country’s insecurity and economic hindrances, Wolpe stated that progress has, in fact, been made.  A few years ago, the country brimmed with palpable ethnic tension, merely uttering the words “Tutsi” and “Hutu” was a dreadful social taboo, and the notion of interethnic negotiation was considered a treasonous act. 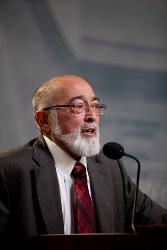 At present, there is a new sense of normalcy and people go about their daily affairs without the sense of looming disaster.  The army has become one of the most cohesive integrative forces in the country and currently plays a major role in the African Union peacekeeping mission in Somalia (AMISOM).  When one considers this historical perspective, “today, the whole Tutsi, Hutu divide is probably the least consequential of all the points of division and conflict within Burundi … there are some places in the world where a very different strategy has been pursued, where the effort is to deny ethnicity.  In Burundi, it’s really remarkable to walk into the country and it’s a bit like America, it’s all out on the table.  People are comfortable now talking about ethnicity.  I think that’s much healthier for the long-term future of Burundi than a strategy that attempts to deny and to repress discussions around it.  That’s what I think is one of the most important contributions that the President and his colleagues have made in bringing Burundi to a new phase,” posited Wolpe.

President Nkurunziza reflected on the influence that Burundi’s violent history still has on the country.  The country has undergone 45 years of systematic social and economic exclusion and division, which has resulted in grave consequences: a refugee population numbering in the tens of thousands, internally displaced Burundians estimated at 150,000, economic stagnation, and a hamstrung development process.  The Arusha Peace and Reconciliation Agreement (APRA) had called for democratic elections in Burundi to take place in 2005.   These elections brought into place the first majority government which has been sustained in power.  The APRA had also set in place formulas through which Burundians began to find solutions to the past conflicts and heal the rift between the government and the armed forces.  For instance, all ethnic groups were to be represented in public institutions, including the army and the police, by a representative ratio. 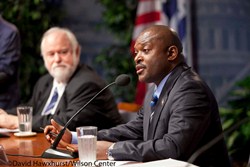 The President stated that Burundi is open to investment opportunities and is a member of the East African Community (EAC), which is working to harmonize security, economic, and social policy and practices.  The final step will be the political federation and the establishment of a common market led by one currency.

In terms of the Hutu and Tutsi relations, Nkurunziza said that the solution was incorporated in the new constitution, which contains aspects of reconciliation – the Truth and Reconciliation Commission – and clearly observes the principles of equality and human dignity.  As for elections, the constitution explicitly states how the process should be carried out, including the recruitment process.  Democracy is the solution to the country’s ethnic divisions.  Economic growth requires contributions and input from the Burundian people, the government, and the private sector.  The President observed, “Avec la Vision du Burundi 2025, ce que le gouvernement doit faire, c’est de désolidariser progressivement des affaires et de donner une place au secteur privé.”[2]  Going forward, free market liberalization will treble in importance for the political and economic development of the country.

President Nkurunziza said that the people of Burundi have willingly surrendered more than 80,000 arms to the government.  The campaign to disarm Burundi has been a worldwide effort.  Some organizations are also working on a project to turn arms into tools for Burundians to use during their daily routines.  It is important to ensure that all weapons are identified and registered, as well as to gain a better understanding of the means by which small-scale weapons are able to circulate throughout the country.

The right to education, the President said, is vital to the country’s future peace and stability.  Previously, the Hutu population was wholly excluded and marginalized yet today the number of primary schools has multiplied twofold and all ethnicities are welcome.  Approximately 2000 schools were built over a three year period.  To build education programs in the country, it is first necessary to have the corresponding infrastructure e.g. schools, roads, and training centers.  Burundi must demonstrate that it can give its people a quality education.  Education in Burundi is constantly evolving: the training of teachers, the number of years of primary school, the breadth of courses taught, and a focus on a “tête bien faite”[3] teaching pedagogy, i.e. one that focuses on creating analytical thinkers.

Vision 2025 was conceptualized to safeguard peace and security, the President explained. 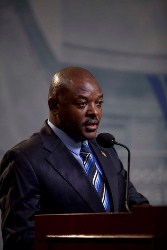 Burundi is conscious of the help it once received from other countries when it was in turmoil; Burundi is showing leadership with respect to peacekeeping and stabilizing missions.  Additionally, some 700,000 Burundian refugees have returned to their homes since 2005.  The country has entered into a Poverty Reduction Strategy Program (PRSP) with the World Bank to tackle social problems such as education and maternal health care.  The President noted the importance of continuing to monitor the post-conflict situation and the democratic process.  There are still innumerable challenges that lie ahead; certain programs can only be implemented progressively because of political differences.  However, developments within the country are a testament to the fact that the country is changing.

[1] Today, we congratulate each other that Burundi, despite problems that have lasted for a long time, now provides aide to other countries in difficulty. In the past, it was said that Burundi was an inaccessible country, a country with problems and one that has experienced embargoes.  But now, it is said that Burundi impresses many countries and the international community.

[2] With the Vision 2025, it is important that the government increasingly withdraws from the business community and allows the private sector to grow.

[3] Head well-made literally, but referring to a holistic educational approach.

President of the Republic of Burundi