At the U.S. launch of the 12th issue in the One Issue, Two Voices series, authors Robert Baugh and William Robson discussed the charges of protectionism triggered by Buy America and debated contrasting approaches to promoting economic growth and job creation during hard times. 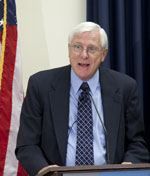 The inclusion of Buy American provisions in the 2009 American Recovery and Reinvestment Act (ARRA) drew criticism and allegations of "protectionism" from businesses and free trade advocates. Although the United States and Canada have a long history of economic cooperation, and the two economies are the most intertwined in the world, ARRA's Buy American chapter kept Canadian companies out of ARRA-related U.S. procurement and disturbed an otherwise close bilateral relationship. The provisions prodded the Canadian government to negotiate a new bilateral agreement with the United States on government procurement, which entered into force on February 16, 2010.

The Wilson Center on the Hill program and the Wilson Center's Canada Institute hosted a discussion on the Buy American and Buy Canadian provisions in U.S.-Canadian trade policy, and their role in stimulating economic recovery from the current recession. William Krist, a senior scholar at the Woodrow Wilson Center and former assistant U.S. Trade Representative for Industrial Trade Policy, moderated the discussion. 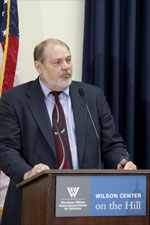 Robert Baugh, executive director of the AFL-CIO Industrial Union Council, opened the program by defending the Buy American provisions of ARRA, asserting that it is reasonable to expect such provisions be included in an economic stimulus package focused on the U.S. domestic economy. Baugh characterized the charges of "protectionism" and the claim that Buy American provisions could spark "trade wars" between Canada and the United States as "alarmist rhetoric." Baugh argued that Canada, the European Union, and developing countries such as China have much stronger, more pervasive domestic preference rules than the United States, but do not hesitate to accuse the United States of protectionism for similar actions. Citing the burgeoning U.S. trade deficit, he said, "If we're being protectionist, we're not very good at it."

Charges of protectionism also "avoid the larger discussion at hand," Baugh said. He stated that in the last decade, 50,000 manufacturing facilities in the United States have closed and more than 6 million jobs have been lost, including a large portion of high skilled workers, hindering the U.S. capacity for innovation. However, Baugh argued that other highly developed countries, such as Germany and Japan, have not had the same experience because of national industrial strategies that enabled them to keep jobs and plan effectively for the future.

Baugh argued that the United States and Canada should adopt a similar strategy. He said that Buy American and Buy Canadian provisions are only tactical actions, and not at all strategic, because they do not develop or encourage investment in industries or technologies such as high speed rail, smart grid, or renewable energy that can create jobs for the future. Baugh maintained that Buy American or Buy Canadian initiatives have the "opportunity to open the door to discussion" of more sensible trade policy that addresses 21st century needs. He argued that free trade fundamentalism is flawed and outdated in light of challenges such as climate change, and that more government involvement is needed to ensure that the U.S. economy is focused on creating capacity and new jobs in this country. 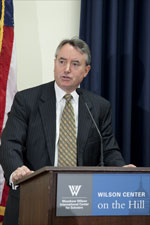 William Robson, president and CEO of the C.D. Howe Institute in Toronto, provided the opposing point of view in support of more free trade between the United States and Canada. Robson labeled the Buy American provision in ARRA as "protectionist," and asserted that such measures always hurt domestic consumers the most. These provisions waste taxpayer money by not allowing procurement officers to seek out the best quality at the lowest price. Robson called such trade barriers the economic equivalent of "shooting yourself in the foot." Arguing that free trade between Canada and the United States has had a powerful positive correlation with growth, openness, and prosperity, he said that original fears and suspicions of negative effects on either side of the border have not been borne out.

Despite the relative openness of U.S.-Canada trade, Robson referred to the Buy American/ Buy Canadian issue as a quagmire of concessions, contradictions, and "tit-for-tat" negotiations. Nonetheless, according to Robson, Buy American and Buy Canadian provisions are not necessarily a bilateral issue, but rather one that belies fault lines within both countries. Even though Canada was prodded by the Buy American provisions of ARRA to open provincial and municipal procurement, Robson said that Canada's hands are not clean when it comes to protectionism. He cited Canada's experience with supply management regimes, particularly the dairy and egg "cartels" that have persisted despite continued declines in production and family farms. Robson called for more negotiations to cement the gains of the February 16 bilateral agreement on procurement, but he also noted that the government should look at other ways of encouraging free trade beyond international agreements. One especially important step would be to bring provincial and state governments to the negotiating table in order to reconcile sub-national contradictions in trade policy.