ChokePoint U.S.: Understanding the Tightening Conflict Between Energy and Water in the Era of Climate Change

A comprehensive reporting project concludes that the current U.S. energy strategy will lead to severe water shortages and damage the country's environment and quality of life.

ChokePoint U.S.: Understanding the Tightening Conflict Between Energy and Water in the Era of Climate Change

Without sharp changes in investment and direction, the current U.S. strategy to produce sufficient energy — including energy generated from clean sources — will lead to severe water shortages and cause potentially major damage to the country's environment and quality of life. These are the conclusions from a comprehensive reporting project presented at the Woodrow Wilson International Center for Scholars on Sept. 22, 2010.

At the event hosted by the China Environment Forum and Environmental Change and Security Program, J. Carl Ganter, director of Circle of Blue, Keith Schneider, Circle of Blue's senior editor, and Jeffrey J. Fulgham, chief sustainability officer and Ecomagination leader at General Electric, discussed the findings of "Choke Point: U.S.", an analysis of the tightening linkage between the nation's rising energy demand and finite domestic freshwater supplies. The four-month Circle of Blue project explored whether the nation's transition to a clean-energy economy will have net dividends or deficits for U.S. freshwater resources in an era of climate change, rising population, and a projected 40-percent rise in energy demand by 2050. 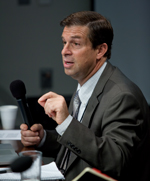 "In the next decade, every single sector will need to reform due to water shortage. This is not in fifty years, this is in the next decade," Schneider told an audience of more than 70 energy and environmental experts from the research, policy, business, and security sectors.

As part of the investigation, Ganter said in his introduction that Circle of Blue dispatched reporters to the coal fields of southern Virginia, the high plains of the Dakotas, California's Central Valley, Midwestern farms, and other regions throughout North America. On one hand, their reporting revealed riveting narratives about the urgent contests between energy development and water supply, and how those contests can be resolved. On the other hand, the reports also recognized the extraordinarily difficult challenges that the energy-water nexus will pose to regional economies, governing practices, technological development, and the quality of natural resources.

Schneider, who directed the reporting, summarized the findings:

• Unless the U.S. government plans more carefully, generating energy from clean alternatives is almost certain to consume much more water than the fossil fuels they are meant to replace.

• The region confronting the energy-water choke point in the most dramatic fashion is the Southwest, where climate change is steadily diminishing snowmelt in the Rocky Mountains and a prolonged drought is threatening to halt energy production at the Hoover Dam.

• The next era of hydrocarbon development is well underway in the United States, as energy companies invest billions of dollars a year to tap the "unconventional" oil sands of Canada, the oil shales of the northern Great Plains, and the gas shales of the Northeast, Texas, Oklahoma, and the Upper Midwest. However, tapping each of these carbon-rich reserves is using three to four times more water than the conventional oil and gas reserves they are replacing.

• Developers in North Dakota are spending roughly $7 billion annually to drill 1,000 wells a year now into the Bakken Shale. That effort will produce 100 million barrels of oil and 100 billion cubic feet of gas this year, but will use billions of gallons of North Dakota's scarce groundwater.

• Each of the thousands of wells drilled each year into the unconventional gas shales underlying the Northeast, Gulf Coast states, the West, and Midwest requires three to six million gallons of water injected under high pressure to fracture the rock and enable gas to flow out of the rock.

• In Kern County, California, where the agriculture and oil industries compete for diminished supplies of water for irrigation and energy production, the winner is the oil industry.

• The energy vector in the United States points strongly to more fossil fuel consumption, not less. 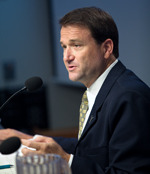 Jeffrey J. Fulgham of General Electric addressed the potential solutions to the tight water-energy nexus, focusing on water demand, water pricing and the use of new technologies. According to Fulgham, smarter policies coupled with the implementation of new low-flow irrigation technology could potentially reduce the use of water for agriculture by 50 percent. Applying the same "reduce before we produce" principle to energy production could achieve significant water-use reductions in that sector as well, he said. From General Electric's perspective, the next five to ten years will produce significant leaps in water technology that, if combined with efficient water use, appropriate valuation of water, and more holistic policies, will be key in avoiding an impending water Choke Point.

The speakers postulated that the trends identified in "Choke Point U.S." could have serious implications not just for the United States, but also for freshwater supplies around the world. In August, Circle of Blue joined with the Wilson Center's China Environment Forum to develop "Choke Point: China" — a companion to the "Chokepoint: U.S." study — which will produce front-line research, reporting, and analysis about one of China's most important resource competitions.