Citizen Countess: Sofia Panina and the Fate of Revolutionary Russia

Citizen Countess: Sofia Panina and the Fate of Revolutionary Russia

Countess Sofia Vladimirovna Panina (1871-1956) was one of the most remarkable members of the generation that made the Russian Revolution. An aristocrat who found her calling in progressive social work, she became the first female government minister after the fall of the Romanovs. Later arrested as an “enemy of the people,” she faced the Petrograd Revolutionary Tribunal and fled her homeland in 1920. Panina spent the rest of her life in Europe and the United States, where she used her own bitter experience of exile to assist fellow refugees in the Russian diaspora. In a discussion on her latest book Citizen Countess, Adele Lindenmeyr discussed Panina as an astute participant in key historical events and explained her contributions to the history of women, liberalism, revolution, and Russia abroad.

Find out more about Citizen Countess and where to buy it here.

Adele Lindenmeyr
"I'm often asked how I became interested in Sofia Panina. There really has been no biography of her, not in Russian nor in English. She is usually given a sentence or two or a footnote in studies of the Russian revolution because of her sensational trial. She was the first enemy of the people, the first defendant in the Bolshevik's first trial of a public enemy. And I don't think I even knew much about her in that regard, but I was doing research on the role of women in Russian charity and I discovered her and her extraordinary creation, the Ligovskiy Narodnyi Dom in St. Petersburg. So then I discovered that she had lived the last part of her life in New York City and had left her papers to the Bakhmeteff Archive and it took me just one visit to the archive to become absolutely fascinated by the long and complex and often interrupted life of this woman who was born a countess and an heiress in Moscow in 1871 and died in Roosevelt Hospital in New York City in 1956 with $200 in her savings account and $50 a month social security pension."

"[Sofia Panina] was a Russian patriot. She wasn't a nationalist. I never found any indication that she had ardent nationalist feelings but she was a strong patriot and no supporter of czarism at all. She committed herself to the liberal ideals of a representative government, democracy, and an enlightened citizenry and that's what she tried to create in her years as a social worker in St. Petersburg before the revolution." 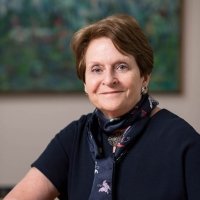 Publication
History
Kennan Cable No. 58: Israeli Reactions in a Soviet Moment: Reflections on the 1970 Leningrad Affair