Closing the Gap: Improving Early Warning for Climate Security Risks in the Pacific

The Wilson Center’s Environmental Change and Security Program heard from leaders and experts on the multi-dimensional weather, water, and climate-related risks that exist in the Pacific, and how improving and coordinating predictive capabilities to support U.S. decision-making can lead to actionable and effective responses in the region.

Pacific Island countries (PICs) are uniquely vulnerable to the effects of climate extremes, variability, and change, including sea-level rise, coastal erosion, El Niño events, extreme weather, and ocean acidification. PIC communities have shown remarkable and long-standing resilience in the face of both physical and social risks. At the same time, many PICs are geographically isolated and remote, heavily aid-dependent, distant from global trade networks, and have limited access to freshwater and natural resources. Understanding how the impacts of present and future climate change will interact with existing vulnerabilities, and where there are entry points for strengthening resilience across the region, is critical to mitigating security risks. A region of strategic importance for the United States in an era marked by great power competition, PICs provide an important and useful context for improving and aligning predictive capabilities and their use for addressing the security risks posed or exacerbated by a changing climate.

On November 14, 2019 the Wilson Center’s Environmental Change and Security Program heard from leaders and experts on the multi-dimensional weather, water, and climate-related risks that exist in the Pacific, and how improving and coordinating predictive capabilities to support U.S. decision-making can lead to actionable and effective responses in the region.

“The exploitation of the aftermath of rapid onset disasters actually is an entry point for how relief becomes a tool in security issues.”

“Our most important issue is trying to get at the science and diplomacy. The peacebuilding, what facilitates cooperation, what helps us get across before, during and after environmental stress.”

“The goal here is to understand conflict but to get to peacebuilding.”

“Often, we suffer from a failure of imagination to see what’s coming on the front line”

“What we’re talking about here is not only pathways by which environmental change can lead to conflict or instability, but also pathways to peace and cooperation.”

“I have 20 grandchildren and this is why I am very serious about this issue, it’s very personal. But I think it’s also about the other grandchildren, not just in Kiribati. Because I am hearing now that what is happening with climate change is no longer simply an existential threat for countries on the front line, but for humanity as a whole.”

“Climate change is the greatest challenge not only facing Kiribati, but facing humanity.”

“Quite frankly, I’ve never found a solution yet, but I keep dreaming of finding a solution.”

“As soon as I read the [IPCC] report, it dawned on me straight away that this is a hugely human issue, and the human dimension of climate change had not been the focus of attention.

“The world was worried about the polar bears but never giving a thought to people like us in the other side of the world.”

“We’re not focusing on emissions levels because, even if the global community were to cut emissions to zero, we would still go under water.”

“At Department of Defense we like strategies and documents because it helps align our thinking and how we’re going to tackle certain areas.”

“A free and open Indo-Pacific it is just that, it’s free, it’s open, it’s open for trade. It’s unencumbered by nefarious activities.”

“We can tie a lot of the Pacific Islands concerns for environmental security, trafficking and persons, counter-narcotics, illegal, unregulated, unreported fishing, things that matter to the pacific island countries, the Department of Defense can help in those areas.”

"The key in the U.S. government is to really around the free and open Indo-Pacific because that brings all the government agencies together."

"Awareness is great, but if awareness is not followed up with action then all we have is we are aware that China is now encroaching on our sphere of influence and that is unacceptable."

“We can’t correct yesterday’s sins, but we can certainly move forward and look at how do we prevent this catastrophe from taking place when we have the means to do so?"

"That’s the conundrum we find ourselves in today. We wait till the crisis, then we respond. But in this case we’re going to be late to the need.”

Continue the conversation on Twitter by following @NewSecurityBeat using the hashtag #ClosingtheGap and find related coverage on our blog at NewSecurityBeat.org. 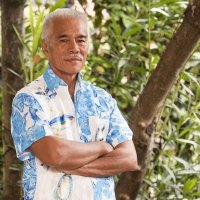