The Cold War was the struggle for the "Soul of Mankind" (Leffler). Beyond the weapon systems and standing armies, it was a war of ideas and ideologies. Radios played an important role in this ideological confrontation: for the audiences behind the Iron Curtain, Western broadcasting opened an alternative channel for the flow of new information and ideas, it broadened the boundaries of internal regime debate, and it helped foster hope for the future. The most well known of the Western services, Radio Free Europe/Radio Liberty (RFE/RL), provided a forum of truth and information that helped bring about the peaceful resolution of the Cold War. 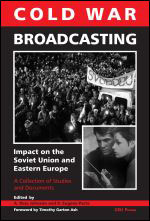 Drawing upon their own experiences at RFE/RL, the editors suggested lessons that are still applicable to today's radically changed information age. Joining them on the panel to provide commentary was Vladimir Tismaneanu, former Wilson Center fellow and director of University of Maryland's Center for the Study of Post-Communist Societies.

A. Ross Johnson posited that Cold War Broadcasting had a demonstrable impact and played a catalytic role in ending the Cold War. By analyzing documents, audience feedback, and elite testimony, Johnson suggested that the volume contributors were able to measure the impact of Western broadcasts on the targeted regimes and populations. Johnson remarked that Western broadcasts not only reached a substantial number of listeners, but they also provided perspective which affected outlook, behavior, and thinking.

To the people of the Soviet Union and the satellites, Western broadcasting provided a contact with the outside world, information and ideas that their governments tried to deny them, perspective on a world that these people longed to be a part of, and a powerful platform of uncensored communication that strengthened opposition groups. Most importantly, for the ordinary listener living in Soviet-dominated countries, these broadcasts bolstered confidence, improved morale, and simply "kept hope alive."

Through the Soviet regime's own documents, Johnson exemplified how RFE/RL forced the Kremlin on the defensive, imposing high cost for countermeasures and jamming of the radio broadcasts. RFE/RL, Johnson argued, became the "elephant in the room," something the communist regimes had to take into account. Such influence and impact, Johnson argued, should not be ignored. 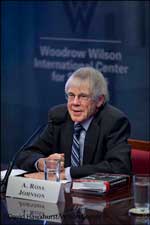 R. Eugene Parta presented evidence from the numerous surveys which RFE/RL carried out during the Cold War, and discussed how the data suggested the centrality of Western broadcasts in the resolution of the Cold War.

In an effort to survey inaccessible populations to gauge the impact of Western broadcasts, RFE/RL had to develop new and unorthodox methodologies. Analyses of listener mail and regime reactions, traveler surveys, emigrant surveys, and MIT computer simulations were all used to model the listener data and assess impact. The questions RFE/RL tried to answer centered on: "Were enough people reached and were they the right type of audience?", "Did authorities take the broadcasts seriously?", and "Was the programming serious and consequential?"

While discussing his findings, Parta estimated peak East bloc audiences to Western broadcasts from 1980 to 1990 with overall listening oscillating around 25% of the entire adult population. Parta reported that Voice of America (VOA) was the leading broadcaster to the USSR from 1978 to 1987, with the BBC in second. In 1988, when the Soviet regime ceased jamming efforts, Radio Liberty became the number one most-listened-to Western broadcaster.

Vladimir Tismaneanu commented that the book was a fine balance of information, analysis, and evaluation, with an appendix of documents that were a "true goldmine." The disappearance of fear in the East could be largely attributed to RFE/RL which symbolized an alternative symbolic power, remarked Tismaneanu. The lie was the mortal soul of communism and Western broadcasting delivered the power of truth over the dictatorship. That in itself is a true measure of impact.

RFE/RL, Tismaneanu suggested, was, by its very nature, more important to the oppressed people of Eastern Europe than VOA, BBC, or Deutsche Welle. RFE/RL was created as a replacement for the national radio stations of the countries behind the Iron Curtain. It employed respected cultural and political figures of those countries; it broadcasted in the local language, and dealt with both domestic and international issues.

Tismaneanu concluded by attributing the impact of RFE/RL's (and Western broadcasting in general) to its high level of credibility and relevance in broadcasting.