At a recent Kennan Institute talk, Timothy Snyder, Associate Professor, Department of History, Yale University, discussed his new book, Sketches from a Secret War: A Polish Artist's Mission to Liberate Soviet Ukraine. According to Snyder, between 1926 and 1932, Poland and the USSR were engaged in a "mini-Cold War." Understanding this mini-Cold War, he argued, can help us to understand both the subsequent Cold War, and Polish policy toward Russia and Ukraine in the post-Soviet era.

The Polish-Soviet cold war was prefaced by a "hot war" between Poland and the Bolshevik army in 1919-1920. According to Snyder, Polish forces, with the help of Ukrainian allies, halted the western advance of the Bolshevik army and the "world Communist revolution," setting a border which divided Ukraine between the USSR and Poland. Snyder explained that throughout the 1920s and 30s, the Soviet government took advantage of Ukrainian nationalism to claim that the ethnically Ukrainian areas of Poland should be united with the Soviet republic of Ukraine. The USSR also employed effective intelligence operations in Poland, including Operation Trust, in which Cheka agents posing as Soviet defectors spread misinformation about Soviet affairs.

In 1926, Polish President Jozef Pilsudski uncovered Operation Trust and began his own aggressive intelligence campaigns in the USSR, thus beginning the secret war, Snyder said. Around the same time, he argued, Poland began to take advantage of Ukrainian nationalism for its own territorial claims. In 1926, Poland began the "Volhynia experiment"—affirmative action programs for Ukrainians living in the Ukrainian-majority province of Volhynia. According to Snyder, the Polish government hoped that Volhynia would be a desirable model for Ukrainians in the USSR. Soon afterward, Poland secretly revived the Ukrainian republic within the Polish state and used Ukrainian military intelligence structures to direct propaganda campaigns at Soviet Ukraine.

Polish foreign policy, Snyder noted, was strongly anti-Communist. Poland was the primary driver of the European-wide movement known as Prometheanism, which attempted to bring about the demise of the USSR by encouraging internal nationalist movements. Snyder explained that Poland supported nationalist movements in many places, including Georgia, Armenia, Chechnya, and Belarus. Ukraine, however, was seen as the keystone of anti-Soviet nationalism and received the most attention.

By 1930, Snyder argued, Stalin perceived Poland as a genuine threat and prepared for a possible Polish invasion. However, Poland did not invade, and the two states signed a non-aggression pact in 1932—a victory for the USSR. Snyder noted that once the Polish threat was effectively eliminated, Stalin began using it as justification for his internal policy and his arrest of thousands of alleged Polish spies. The end of the Polish-Soviet cold war also had negative consequences for Ukrainians in Poland, Snyder said. Once ethnic Ukrainian Polish citizens were no longer seen as an asset in the fight against Communism, they were seen as a liability, and their rights in Poland were severely curtailed. 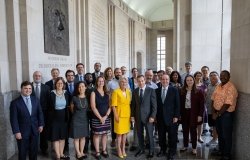