A Conversation with Ambassador Ken Salazar

On Thursday, July 14th from 9:00am to 10:00am ET the Mexico Institute welcomed Ambassador Ken Salazar for a discussion on the state of the U.S.-Mexico relationship and the Biden Administration’s plan to further strengthen collaboration between both countries.

President Andrés Manuel López Obrador’s visit to Washington occurred at a vital moment for the US-Mexico bilateral relationship. Challenges and opportunities regarding migration, security, nearshoring, trade, energy and other important issues continue to be at the forefront of the bilateral agenda.

On Thursday, July 14th the Mexico Institute welcomed Ambassador Ken Salazar for a discussion on the state of the US-Mexico relationship and the Biden Administration’s plan to further strengthen collaboration between both countries.

“No two neighbors can really resolve their challenges or define their future unless there’s communication. For many years the dialogues have died - on security, on migration, on economics. We’ve resurrected those under the leadership of President Biden and his team.”

“Human smuggling networks have come to profit from the disorder of the migration laws and system that we have allowed to be created because there has been a lack of courage to address the issues of migration. So where are we today? Well, we take you to the Summit of the Americas. President Biden announced there the declaration that we have to deal with this issue through a regional framework. You can’t address these unprecedented flows of migrants simply by doing the same old song and dance of the politics and division that have bedeviled this country for the last 40 years. You have to move beyond that.”

“Mexico has a history of corruption, very deep-seated corruption, that has transcended decades and administrations. There’s corruption that’s at the root of many of the problems that we’re seeing all across Latin America - Central America and Mexico. At the highest levels, there’s a commitment to root out corruption, because unless you root out corruption, you’re not going to be able to enshrine the democratic values that are set forth in the first paragraph of this joint declaration. You cannot have a functioning democracy, or fair and free elections, or respect for human rights, or support for freedom of the press, unless you deal with the fundamental issue of corruption.”

“Some people ask me how I feel about [the US-Mexico] relationship at this point in time. I’m determined and optimistic, because there’s only one way to go. It’s like a family, we’re neighbors—130 million that side, 300+ million this side. We gotta figure it out, and we have not done a very good job, frankly, in the past. Not in the 90s, not in the last decade, not in the prior administration, so this blueprint [the joint declaration between President Biden and President Andrés Manuel López Obrador], in my view, really is a historic one.” 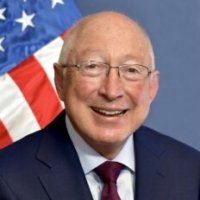