Crime and Violence in Central America: A Human Development Approach

The Latin American Program and the UNDP convened this seminar to focus attention on the alarming levels of citizen insecurity in Central America and consider policy responses.

Fifteen years following democratic transitions and the end of civil conflicts, Central America is experiencing more violence than ever. According to the United Nations Development Program (UNDP) report, Human Development Report for Central America 2009-2010, the Central American region—comprising Belize, Costa Rica, El Salvador, Guatemala, Honduras, Nicaragua, and Panama—is the most violent region in the world, excluding countries at war or experiencing severe political violence. The overall homicide rate for the region is more than three times the global average, exceeds the Latin American average by seven percentage points, and is increasing. According to the UNDP, the increase in violence between 2000 and 2008 was most severe in Guatemala, where homicides increased 20 percent.

To focus attention on the alarming levels of citizen insecurity in Central America and consider possible policy responses, the Latin American Program and the UNDP convened the seminar "Crime and Violence in Central America: A Human Development Approach," held at the Wilson Center on June 24. The seminar also underscored the consequences of citizen insecurity for economic development. 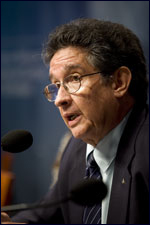 Hernando Gómez Buendía, coordinator of the UNDP study, described the multiple categories of insecurity in the region, including homicide and assault, rape, kidnapping and human trafficking, and domestic violence and violence against women, organized crime linked to drug trafficking, and corruption. He identified several "incubators" for crime and "organized delinquency" (youth gangs as well as organized crime), including severely stressed family structures, an abundance of young people who are neither employed or in school, rapid and chaotic urbanization, an abundance of light weapons, and high consumption of drugs, and alcohol. Added to these factors is a context of inequality and social exclusion as well as a culture that has long tolerated violence. According to victimization surveys, in 2008 at least one and up to three of every ten persons in Central America reported having been victim of a crime. The malfunctioning of the criminal justice system in the sub-region has been magnified by the dimension of the crisis. Not surprisingly, Central America has witnessed a rapid rise in the privatization of security and of "justice," including lynchings.

Official responses to the rise in violent crime have not remedied the problem. Hard-line policies known as mano dura ("strong hand") have increased the size of the prison population and imposed longer sentences, without resolving the surging rates of crime and violence. Gómez Buendía also criticized an opposite attitude (mano blanda or "soft hand") that holds that the crime problem cannot be solved until poverty is resolved. Gómez Buendía called instead for a mano inteligente ("intelligent hand") to improve and better manage the overloaded security and justice system. The current system, he argued, has been reduced to a simple triangle of police, judges, and jails, with too many missing links to civil society and to other state institutions, including those at the local level. Gómez Buendía called for a new civic contract in which adherence to the law is reinforced by the state's guarantee of equality before the law as well as by social inclusion. 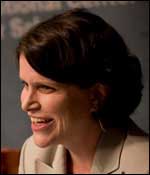 Marcela Smutt, coordinator of the UNDP's democratic governance program in El Salvador, noted the sharp rise in homicide rates in El Salvador from October 2008 to the end of 2009. Rates vary in different parts of the country, but the number of murders in and around the capital is more than four times as high as the national average. Sixty-eight percent of homicide victims are between the ages of fifteen and thirty-four, and nine out of ten victims are male; this makes El Salvador's rate of homicides of young men one of the highest in the world. That said, homicides of women have also soared—by 197 percent over the last decade. The vast majority of murders are committed with firearms: the UNDP estimates that about 500,000 firearms are in circulation in El Salvador, some 60 percent of which are illegal. Smutt pointed out that, as the result of the mano dura policy of the previous governments, El Salvador's prison population increased by 184 percent between 2000 and 2009. Severe overcrowding—the main men's prison outside the capital was at 424 percent capacity—has converted prisons into veritable "universities for crime," Smutt said.

In detailing how violence affects everyday life as well as development, Smutt made reference to surveys demonstrating that 90 percent of Salvadorans do not feel safe in public spaces; forty percent have limited the geographical perimeter of where they shop, and 12 percent have closed their businesses due to rampant insecurity. Smutt cited UNDP estimates that violence in El Salvador costs the country roughly 11.5 percent of yearly GDP, which is double the spending on education and health combined. The figure is roughly equivalent to eight months of remittances from Salvadorans abroad. Underscoring Gómez Buendía's point, she noted that the amount that individuals and private companies pay for private security and surveillance exceeds the Salvadoran government's public spending for the security sector.

Smutt discussed the inadequacy of public policies implemented over the last 15 years to confront crime and violence in El Salvador. Policies have been reactive as well as fragmented and un-monitored, she said. She outlined policies for justice and security sector reform that would combine coordinated social prevention programs with the modernization and strengthening of the institutions of law and order. Strong leadership is needed, she said, to overcome the gaps in policy implementation. 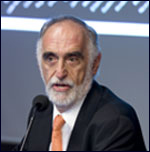 UNDP consultant Héctor Rosada Granados, director of Guatemala's, Centro de Estudios Estratégicos y de Seguridad para Centroamérica (CEESC), called Guatemala one of the most dangerous countries in the world. Homicide statistics for 2009 were double the rate of Mexico's and exceed the figures during many years of the internal armed conflict. The absence of policies to address the root causes of that conflict and the continued existence of a clandestine security apparatus have weakened Guatemalan institutions and opened the door to organized crime. In 2009 the country registered 6,498 homicides, an increase over the previous year, which translates to roughly 18 homicides per day. An astonishing 96 percent of these homicides never reach the judicial system, thus highlighting the severe levels of impunity. Even worse than the impunity, Rosada Granados maintained, is that many of the homicides are carried out by organized crime and narco-trafficking groups; these groups operate with a certain degree of autonomy throughout much of the country.

Rosada Granados criticized the 2009 National Accord for the Advancement of Security and Justice as "the sum total of all our fears," rather than a strategic plan with immediate and longer term goals as well as a road map for achieving them. He called for the establishment of a "Political Convergence Body" bringing together the heads of the executive, legislative, and judicial branches, along with the attorney general, to set forth an agenda for integrated action. He called for police reform, based on a preventive model, along with the creation of investigative units and a special forces group to combat organized crime and drug trafficking. Rosada Granados also recommended a national institute to protect and support victims, a strengthening of the judicial system to prevent organized crime from buying off judges, and the establishment of a strong public defender institution. He suggested promoting debates at the local level on preventing violence and tackling the gang problem directly.

He underlined several risk factors that Guatemala will first have to manage. First among them is the 2011 elections, and the need for the government that takes power in 2012 to guarantee continuity with initiatives underway. Second, he called for the articulation of a strategy to deal with members of the security forces found to be involved in organized crime. Finally, he noted that the mandate of the United Nations commission to fight impunity in Guatemala (CICIG) expires in 2011, with paradigmatic cases still potentially unresolved. 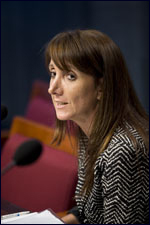 Clare Ribando Seelke, specialist in Latin American affairs at the Congressional Research Service, Library of Congress, reviewed the Obama administration's strategy to assist Central American governments reduce crime and violence. The strategy is expected to balance law enforcement, crime prevention, institutional reform, and capacity-building. There is a special focus on guaranteeing "safe streets" for the civilian population and disrupting the movement and activities of criminals and contraband. Other aims include building strong and accountable governments and law enforcement bodies, establishing a state presence in communities at risk, and enhancing international cooperation. She praised the UNDP report for its way of defining citizen security, emphasizing a community-oriented and integral perspective. Her suggestions for extending the research reflected in the UNDP report included a closer look at the impact of U.S. immigration and deportation policies on crime in the region, highlighting the differences in the security dilemmas of Central America and Mexico, and a larger discussion on the role of the military in the rise of criminal activity. Finally, Ribando-Seelke raised the question as to why mano dura ("strong hand") policies continue to be in high demand despite generating desired results.