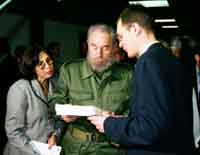 CWIHP director Christian F. Ostermann participated in the 22-24 March 2001 conference which brought together former officials of the Kennedy Administration, the CIA, members of Brigade 2506, and Cuban government and military officials in Havana for three days of discussion on one of the most infamous episodes of the Cold War—the April 1961 invasion at the Bay of Pigs. National Security Archive Senior Analyst Peter Kornbluh, director of the Archive's Cuba Documentation who organized the U.S. delegation for the conference, called the meeting "an historical, and historic, event," organized to produce "new documents, details, and interpretations" of events before, during and after the 3-day battle at the Bay of Pigs. The meeting was planned "in the spirit of historical exploration," according to Thomas Blanton, executive director of the National Security Archive. Given the continuing tension in U.S.-Cuban relations, he noted, "it is imperative to learn the lessons of this conflict so as not to repeat the past, and this kind of serious scholarly discussion—with actors, witnesses, experts and declassified evidence—gets us beyond rancor to dialogue." 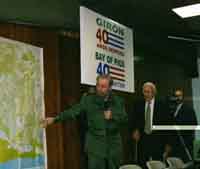 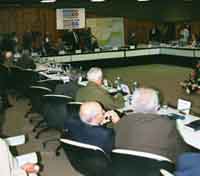 On the occasion of the conference, the Cuban government released some 480 pages of declassified Cuban documents relating to the invasion, including intelligence reports on U.S. preparations and Fidel Castro's directives during the battle, records that "shed substantial light on Cuba's ability to repel the invasion," according to Kornbluh. One of the Cuban documents, a January 1961 report on the CIA's clandestine training camps in Central America and Florida, shows that Cuban intelligence analysts estimated there were as many as 6,000 CIA "mercenaries" training at a camp in Guatemala, overestimating by far the agency's 1,400-man invasion force.

Besides a number of US documents, obtained Kornbluh, documents released for the conference included Russian records and Czech documents obtained by CWIHP partner Oldrich Tuma as part of CWIHP's initiative on "the Cold War in Latin America." Among the Russian records is memorandum of conversation between Soviet Ambassador S. M. Kudryavtsev and Ernesto "Che" Guevara on 14 April 1961, the day before the first B-26 air strikes on the Cuban air force, in which Guevara asserts that Kennedy Administration efforts to establish "large beachheads of the external counterrevolutionary forces . . . would be doomed to failure." CWIHP plans to publish the Cuban documents and translations. For updates, sign up for CWIHP's listserv. For Cuban documents previously published by CWIHP, search the Virtual Archive.