A Dialogue on Managing the Planet

"Collectively, the impact of humanity on the way the planet works is enormous and headed in disturbing directions," said George Mason University professor Thomas Lovejoy in January at the first in a monthly series, "Managing the Planet," led jointly by George Mason University and the Woodrow Wilson Center. The series will focus on how to take "environmental management to the scale of the entire planet," as climate change, increasing energy consumption, and population growth place increasing stress on natural resources. We need to "chart a better course for the human future," said Lovejoy.

Joining Lovejoy at the kickoff meeting were Dennis Dimick, executive environment editor at National Geographic, and Professor Molly Jahn of the University of Wisconsin-Madison. 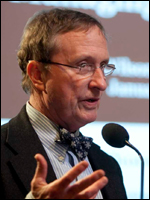 "The entire human enterprise is based on the assumption of a stable climate," said Lovejoy. The "most dramatic part of the story" in recent decades has been the melting of ice in the Arctic and in the mountain ranges of tropical zones. At current rates, tropical glaciers will completely disappear within the next 15 years. Though scientists predicted it would last until at least 2015, Bolivia's Chacaltaya glacier – once renowned as the world's highest elevation ski area – was reduced to a "few lumps of ice" in 2009, according to the BBC.

Glacial melt has raised water temperatures, altered species migrations, and threatened water supplies, coastal ecosystems, and the communities that depend on them, said Lovejoy. Higher ocean temperatures also cause the "fundamental partnership" between coral reefs and algae to break down, and "the Technicolor world essentially goes black and white," he said.

Ocean acidification, fresh water shortages, melting glaciers, pollution, forest fires, and a "vast whipsaw" of temperature and weather extremes are just some of the effects human consumption has had on the planet, said Dimick. "It's a sign from the Earth. It is telling us, ‘not all is well.'"

As the world's population nears seven billion this year, "we have one planet, yet we live like we live on four," said Dimick. National Geographic's new series "Population 7 Billion" seeks to answer the questions, he said, of "how do we find balance? How do we find ways to lower the intensity of our demands on an Earth that is telling us it is strained?" 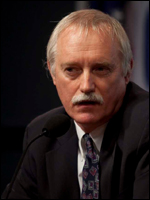 Finding solutions to these challenges will require us to "look forward and confront the future," said Dimick. "We need to rethink our whole global energy system," he said, and "rethink our basic premise about what we need, as opposed to what we want."
The global emissions limit of 450 parts per million (ppm) of carbon – the level needed to achieve the two-degree warming limit agreed upon at Cancun and Copenhagen – "is probably too high," said Lovejoy. Most scientists agree that 350 ppm is a safer level; however, the world is already at "390 and climbing," he noted, and global temperatures are projected to rise two degrees Celsius by 2035. If we want global warming to stop at two degrees, carbon emissions will need to stop growing by 2016, he said.

Figuring Out "Plan B"

"We have a problem that is presenting itself in a whole host of ways, with urgency that cannot be denied or dismissed," said Jahn. "The way we do agriculture is a very significant contributor" to that problem, she said. Today, in the United States, "we waste 40 percent of the food we grow," she said. 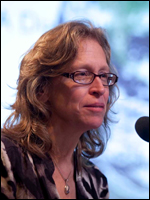 "Plan A…was about maximizing productivity at all costs," said Jahn. "It looks like we may need another plan." But figuring out "Plan B" will require steps by both policy and science communities. "We still have enormous gaps in our understanding towards even the basic science platform upon which these very important decisions about ways forward lie," she said.

Managing the planet must begin with managing data so that we can "transition between data, information, and knowledge, and march this information out to…those making decisions that matter," said Jahn. The information management structure that developed in the medical sciences and led to the creation of the National Library of Medicine is a useful model for managing the planet, she argued. "Personalized medicine" for the planet would allow people to use data to make better decisions about who should be doing what and where.

Using and expanding the knowledge base is a crucial step towards bringing together the science and policy communities on an international scale in search of solutions to managing the planet. "If we work together, we can change the world," said Dimick.