Director's Forum with Fernando Henrique Cardoso: The Challenges of Brazil After Lula

A recent cover story on The Economist declared that Brazil used to be all promise and now it delivers. Although inflation is down and the private sector is able to compete globally, deeply-rooted problems related to education, fiscal responsibility, low savings rates, social security deficits and a dysfunctional system of political representation will likely be on the top of the agenda for Brazil's next president to be elected in October 2010, according to a discussion with former Brazilian President Fernando Henrique Cardoso and Professor Albert Fishlow, who just finished a book on the challenges of Brazil after Lula.

The next president of Brazil will encounter an unprecedented favorable scenario: a vibrant private sector, democratic stability, economic growth, and an abundance of natural resources.

"Brazil is on the cusp of enormous potential wealth that emanates from what seem to be quite extensive petroleum resources," Fishlow said about the pre-salt discoveries.

But on a closer look, Cardoso and Fishlow revealed perennial challenges that must be overcome in order for Brazil to fulfill its great potential.

Brazil's political system may be strong, but the main culture of the country is not democratic. "We don't have the sense that we are all equal under the law," Cardoso said. "This is a problem of culture, which is much harder to change than government."

In terms of the economy, Brazil is not saving enough and current estimates place the investment rates at less than 20 percent. "If Brazil intends to grow on a sustained basis at a rate of around 4 to 5 percent a year, an investment rate of 25 percent is necessary," Fishlow said. The numbers for China and India are around 45% and 30%, respectively.

The legacy of Cardoso 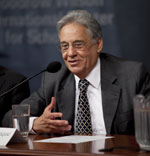 "Before the government of Cardoso, Brazil struggled with slow economic growth, a bloated state, violent crime, and political corruption," said Fishlow, explaining that Cardoso set the stage for Brazil's rise in the global arena.

Traditionally, Brazil's private sector had close relations to the government. Cardoso government tried to modernize it by creating more competent instruments to finance the agricultural industry independently from the official sources.

Also, privatization led by Cardoso changed the scenario in Brazil, especially in the telecommunication system.

"It would have been impossible to enter in modernity without a new telecommunication system," Cardoso said, adding that that the number of mobile phones skyrocketed from 2 million in 1997 to 160 million today.

But perhaps one of the most important legacies of Cardoso was the Real Plan (Plano Real), which managed to control inflation and created a positive economic environment.

"Economic stability was and remains at the center of Fernando Henrique Cardoso's great legacy," said Joseph Harrington, former ambassador to Brazil and co-president of the Brazil Institute Advisory Council, who introduced the speakers.

In his upcoming book, Fishlow characterized the Lula government as a continuation of Cardoso's. In some aspects, such as the importance of social welfare and the health system, Cardoso agreed.

"Not because of me or Lula but because of Brazilian society; we evolved a lot…in terms of institutions we are stronger than we have been before," he said.

But Cardoso criticized Lula's approach to fiscal responsibility and his macroeconomic policies, particularly in regards to the anti-globalization mentality within the Worker's Party (PT).

While Lula has managed to carry on some of the positive aspects of Cardoso's economic policies, the former president said that Chief of Staff Dilma Rousseff, Lula's preferred candidate, is more unpredictable and less tested as a politician than Lula and himself were to handle the internal pressures of the Worker's Party and a congressional alliance she would have to build in order to govern, which are cause of concern.

"If you look ahead after Lula, the future government will have to face a difficult fiscal situation," Cardoso said, referring to growing current expenditure in the public sector and the overvaluation of the currency. Adding all that to the economic crisis, both Cardoso and Fishlow are cautiously optimistic about Brazil's future.

The biggest challenge for the next president, according to Fishlow, will be the social security system, which presents a 4 percent deficit that is expected to grow as the population ages.

If Brazil is able to decrease the deficit and save the pre-salt petroleum resources to invest in education, the prognosis for Brazil will be good, Fishlow said.

A possible pitfall is the country's political structure. Fishlow called for a definite political reform that would organize its fragmented political party system, also plagued by a few interest groups and lobbyists.

The challenges may seem insurmountable, but "because of democracy it would be impossible in Brazil to continue to behave as in the past, that's to say, to increase the rate of growth and investment in expense to social welfare." Cardoso said.