"Excellence in climate communication has to do with public engagement – communication that expands the portion of the public that is engaged in this issue and enhances their degree of engagement," said Edward Maibach, director of the Center for Climate Change Communication at George Mason University. "Enhancing Public Engagement in Climate Change: The 2011 Climate Change Communicators of the Year," was held jointly by the Environmental Change and Security Program (ECSP) and George Mason University on June 8 to present awards for excellence in climate change communication by Naomi Oreskes and the Alliance for Climate Education.

Despite the weight of credible scientific evidence, polling data provided by Oreskes showed that the number of Americans who believe that humans cause climate change dropped from a peak of 72 percent in the early 2000s to only 50 percent today. According to Maibach, climate change science is difficult to translate into easily relatable terms, especially for those who struggle with basic scientific and statistical concepts. Climate change is "the ultimate abstraction," he said, and "the power of [the award recipients'] work is that they have taken the abstract and made it concrete." 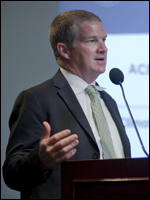 Pic Walker, director of the Alliance for Climate Education (ACE), added that most discussion focuses on climate change effects that are too broad or distant: "The images that have been used are just not the right images. They are not localized; they are not customized to people so that they can feel the impacts of what's happening in their communities and what's happening around their own home. They don't understand the connection between climate change and their daily lives," including its economic impacts. 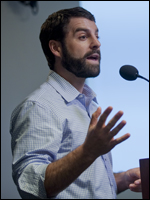 ACE's unique outreach program targets high school students around the country. Its presentations pair captivating animations with dynamic live presenters, who play off pop culture to engage students. Matthew Lappe, a program officer at ACE, proudly pointed out that the San Francisco Chronicle called the program a "cross between James Hanson and Lady Gaga." In the two years since the program began, ACE has given presentations to approximately 86,000 high school students at more than 1,400 high schools nationwide.

Teenagers are an untapped resource for future leaders in climate change, said Walker. However, ACE found that there is no standardized climate change curriculum for teenagers; 54 percent of teenagers would fail a basic climate change science test today, he said. "If someone does not understand the issue, there is no reason to activate on the issue," said Walker. The presentations are "customized in a way to really hit them where they are at in terms of issues that they are dealing with in their daily lives," he said.

Unpacking the Political Challenge to the Climate Consensus

Oreskes' 2010 book Merchants of Doubt, co-authored with Erik Conway, traced the roots of the current skeptic movement to a relatively small group of conservative physicists that coalesced during the ideologically heated days of the Cold War.

"It is clear...that this debate [is] not about the scientific evidence," she said. It is about "governmental control of markets and of individual liberties and about the truly important and crucial question of when and whether governments should intervene in the marketplace to protect people from dangers," Oreskes said.

Borrowing tactics from the tobacco industry, the movement focused on "merchantizing doubt," said Oreskes. Despite the fact that the Intergovernmental Panel on Climate Change's statements are consistent with peer-reviewed scientific literature, there is still a movement to challenge its authenticity.

For example, Oreskes pointed out that Republican strategist Frank Luntz, who spearheaded the George W. Bush administration's policy of centering the climate debate on scientific uncertainty, conceded the validity of climate science. However, in strategy papers, he said the Republican party nevertheless should focus on the margin of error.

A margin of scientific doubt does not justify ignoring these crucial environmental problems, said Oreskes: "Global warming is a bill; and that bill has become due."