Webcast will appear on this webpage
This event will be webcast live
Live stream will begin in approximately —:—:—

As the European Union considers its role and aspirations in the new, global Arctic, as well as its role in complementing EU members states’ Arctic strategies, EU Ambassador at Large for the Arctic Michael Mann provided an overview of the EU’s current position on the Arctic and insights as to the important issues the EU is considering in the coming years. Ambassador Mann was joined by Terkel Petersen, Senior Advisor in the European External Action Service, to discuss their efforts to advance and enable the EU’s strategic Arctic direction.

“We see that the Arctic is being and will be exploited for its resources. We aren't going to say that people shouldn't be, you know, using the resources, the minerals in the Arctic—but any industrialization in the Arctic, any exploitation of these resources should be done in a sustainable way. That means not only environmental sustainably but also, of course, in terms of social sustainability, so making sure that the Indigenous peoples who live in the Arctic and the other Arctic communities are actually getting some of the benefit from this.”

“The green deal is not a green deal for the Arctic. It is a green deal for Europe as a whole. We hope that we can bring along the rest of the international community under the auspices of the UN process, the Paris Accord, because at the moment the way things are looking is that most countries are not going to get anywhere near the maximum 1.5 percent temperature increase that we need to do to even to even bring a halt to things, let alone improve things.”

“I would argue strongly, and I think the facts would back me up on this, that we have learned from our experience. We've learned from looking at the Grand Banks as well in Canada. We've learned that overfishing…it can actually wipe out entire populations and, we like to think of ourselves rather self-righteously as the sort of world leaders in sustainability and preservation. And so we have got, through bitter experience perhaps, we have developed a fisheries policy in general, our common fisheries policy, that is very preventative and precautionary—it wasn't always, but it is now.”

“If you're a Sami living in the northern part of Finland or you’re [in] a region in northern Canada, you want that world that you're living in developing. So economic development and social aspirations for them matter. But in the global system, we see seven billion people using carbon and all other resources from around the planet, and it affects the Arctic. How do we get those people who live in the Arctic—who are maybe 4 million—to take the responsibility on behalf of 7 billion people?”

“The oceans are part of the Agenda 2030 [for Sustainable Development], I think it's goal number fourteen, and there are a number of people involved in this. We have an international oceans governance agenda: there are some big meetings on the blue oceans that are happening constantly, and of course there are scientists who will know how to track the various fish stocks as they move.” 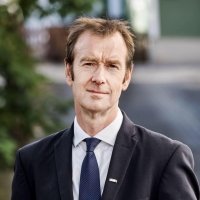