Exploring the Links Between Global Environmental Change and Human Security and Population: A Meeting in the AVISO Policy Briefing Series

January 30, 2001—Conventional wisdom (and much U.S. policy toward the developing world) holds that rapid population growth is a major cause of poverty, human insecurity, and environmental degradation.

But the actual impact of large populations is much more complicated and uncertain. Human security turns out to be dependent on many different forces at many different levels—from U.S. environmental policy to single households in developing countries.

Betsy Hartmann and Alex de Sherbinin detailed their findings on this subject in a presentation of papers from the latest issue of AVISO: An Information Bulletin on Global Environmental Change and Human Security. While Hartmann challenged some of the overarching assumptions of current thought on population and the environment, de Sherbinin explained how grassroots efforts really can make a difference in building sustainable societies.

Toward a Broader Definition of Human Security 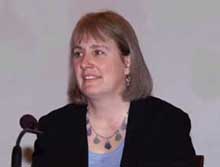 Betsy Hartmann said that simply blaming population growth for environmental risk and a low quality of life "blocks a deeper understanding of the obstacles to achieving human security and ultimately limits policy options." Other factors—such drastic disparities in consumption patterns, power, and income between the developed and the developing world—need to be considered.

"There is an overpopulation of cars," said Hartmann, "that is the main source of population distribution in the United States and a major factor in the degradation of the environment and quality of life here."

Hartmann cited the technology investment choices of developed countries (e.g., highways versus public transit, or missile-shield defense systems versus energy-saving technologies) as another threat to global sustainability. She also argued that environmental disaster often occurs where poor people—especially women—lack the means and freedom to invest in land improvement or diversify their livelihoods.

"We have a tendency to blame environmental degradation on poor peasants," Hartmann said. "But this ignores the larger forces at work, the specific property regimes. In the Amazon, it's mining and ranching interests who are destroying the hillsides."

Hartmann said that the last two decades have been a decisive era—not only for the decline of human security, but for the ways governments and nongovernmental organizations (NGOs) sought to reverse that decline. For example, she blamed the structural adjustment policies of the 80s and 90s for the defunding of African public health programs, which she said contributed to the subsequent inability of healthcare systems to cope with the AIDS epidemic there. "Access to decent health care, one of the most fundamental conditions for human security, was sacrificed on the altar of the free market," Hartmann said.

But during this same period, according to Hartmann, government and family planning officials also took an increasingly narrow approach towards population policy. The drive to reduce population growth led to a distortion of family planning programs: they became focused on meeting demographic targets instead of increasing access to birth control and meeting basic health needs. Fears of mandatory sterilization kept people in many developing countries away from clinics altogether.

Hartmann called the 1994 United Nations International Conference on Population and Development in Cairo "a great step forward" in population policy. But Cairo's implementation proved difficult because of a lack of funds and infrastructure, opposition from anti-abortion and fundamentalist forces, and a narrow empowerment agenda for women that gave short shrift to land and legal rights.

Now, according to Hartmann, U.S. President George W. Bush's restriction of government funds to any organization that provides abortion services or provides education about abortion overseas (known as the "global gag rule") will further undermine women's health worldwide. "What the [political] right refuses to recognize," said Hartmann, "is that women have abortions whether they are legal or not. The question is whether they are safe, or whether women will die or suffer lifelong complications."

But Hartmann said she also fears another kind of gag rule—the failure of the population policy community to critique neo-Malthusian assumptions and coercive population control policies for fear of playing into the hands of conservatives. And she criticized how both the media and international family planning programs link overpopulation with famine and conflict. Hartmann cited several examples of these linkages—from a recent RAND Corporation report to covers of The New York Times Magazine and the Atlantic Monthly—in arguing the speciousness of this approach.

"The population community needs to resist the use of negative racial and gender stereotypes that prey on fears of these people in the U.S.," said Hartmann. "Blaming the poor for environmental degradation diverts attention from the U.S. role in global warming and the lack of a responsible U.S. environmental policy overseas." She said that a far more positive way to link population issues to human security would be to expand access to reproductive health resources as well as to work for human rights.

Population and Environment are Local

New data presented by de Sherbinin from the Pilot Environmental Sustainability Index (ESI) also revealed interesting relationships among poverty, population growth, and environmental degradation. While low human development is associated with high total fertility rates and high human vulnerability, for example, no correlation has yet been established between population growth and the condition of environmental systems. "Good governance and lack of corruption correlated highest with the best environmental quality," said de Sherbinin. (You can view the full ESI data set at
http://www.ciesin.org/indicators/ESI/pilot_esi.html
.)

De Sherbinin then compared two cases (Haiti and the Machakos District of Kenya) in which increases in population density led to diametrically opposite results. The cycle of population growth and environmental decline in Haiti was caused by a legion of factors: poor governance, a feudal system that blocked the emergence of modern market dynamics, and predatory regimes that failed to respect human rights and disregarded civil society and NGOs.

The Machakos District succeeded because (among other reasons) local and national institutions encouraged not only community and private investment but access to markets and equitable land tenure. With such dynamics at work, population density contributed not only to an increased labor supply but also to lower interaction costs and more knowledge-related institutions.

Audience members questioned the radical de-emphasis of population growth as a factor in poverty and environmental degradation. Hartmann replied that "we need urban planning to manage demographic trends. Instead of making aggregate arguments, it's much more helpful to look at local situations. . .We need planning rather than panic."

Hartmann also stressed that much environmental degradation is a consequence of weak local institutions and deployment of inappropriate technologies. And she insisted that the alarm over population growth was misplaced. "There are plenty of other things to be alarmed about," Hartmann said. "It's hard to move away from alarm's proven track record, but we need to figure how we can be urgent about issues without blaming poor people."

Both Hartmann and de Sherbinin said that renewed attention on the developed world's consumption habits is overdue. "It's relatively straight forward how to get people off a high-consumption, high-technology lifestyle," said de Sherbinin. "It's more problematic to advance this option politically. We will start to face real tradeoffs eventually."