Fairness and Transparency in Cameroon's Next Presidential Election

A delegation of Cameroonian officials will present the government’s plans for the coming election as a backdrop to a discussion on how the international community can help ensure that democracy, human rights, the rule of law, and accountability are respected.

Fairness and Transparency in Cameroon's Next Presidential Election

H.E. PROF. GHOGOMU PAUL MINGO, Minister/Director of Cabinet in the Office of the Prime Minister, Republic of Cameroon;

DR. FONKAM SAMUEL AZU'U, Chairman of the Electoral Board of Elections Cameroon (ELECAM);

“Today’s event here at the Center has stirred some controversy, […] in fact, we have been urged not to host the government delegation of Cameroon because of the questions raised about human rights violations, freedom of the press, transparency in the election process, and the fear [that] the election results will again, as in 2004, be fraught with irregularities and challenges for their validity,” said Steven McDonald, Director the Africa Program. 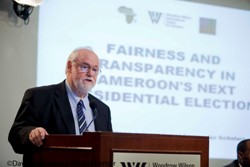 However, the Wilson Center will always seek to provide an open and impartial platform for the expression and vetting of diverse views and complex issues, and it is on these grounds that this event is being held.  An earlier session with an opposition presidential candidate was held, and the Wilson Center has invited impartial speakers and a wide range of interested parties, including diaspora members.

The Vision of Biya 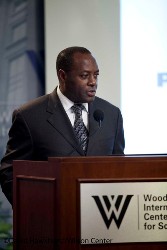 vision for the future of Cameroon.  “The President’s vision for Cameroon is realistic,” stated Ghogomu Paul Mingo, Cabinet Minister in the Office of the Prime Minister of Cameroon.  This vision encompasses the inclusion of “a free and independent press, and [allowing] human rights to flourish” in this Central African nation with elections scheduled in October.  Opponents of President Biya, who has ruled Cameroon for nearly three decades, claim that democratization in Cameroon has been hobbled by grave human rights abuses, suppression of the media, imprisonment political dissenters, and corruption. Minister Mingo added that the current administration is determined to continue its fight against poverty, implement the rule of law, and battle corruption so that democracy in Cameroon is assured.

Elections Cameroon (ELECAM), an independent election management body created by the President, was designed to 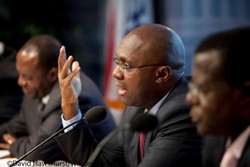 administer unbiased oversight of the electoral process.  “The process of creating ELECAM was an inclusive process, because when the President wanted to create ELECAM [or designate its leadership], he called together all the stakeholders: political parties, religious leaders and members of civil society, and asked ‘how can we improve our electoral process?’’’ stated Fabien Nkot, Senior Advisor to the Prime Minister.

“The upcoming elections will demonstrate our commitment… [as they] will be free, fair and transparent,” asserted Mingo.  Thus far, 52 Cameroonians have submitted their candidacy for the presidential post.  Among these aspirants is the incumbent, President Biya, who will be seeking an unprecedented seventh term in office.  International analysts had widely predicted Biya’s triumph on Election Day.  In regards to the inclusion of the Diaspora’s vote, the Cameroonian delegation confirmed that 23 billion CFA Francs ($48.5 million) have been spent to ensure that their ballots are counted.  President Biya also waived the fees associated with national identity cards for voter registration owing to popular discontent and financial constraints.

In response to questions regarding President Biya’s alteration of the term limits provision in the constitution, Fonkam Samuel Azu’u, 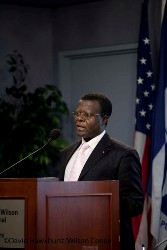 Chairman of the ELECAM affirmed that “[he] personally sees nothing wrong with lifting term limits,” and that what is “important is to have an electoral system that allows people to be voted in and out.  If you are voted in and you do not do a [good] job, after one term, you’ll be voted out.”  Therefore he reiterated that, “there is no need to worry about term limits if [there] is a proper electoral system.”  Other inquiries directed at the delegation challenged President Biya’s capacity and credibility as a leader of the people, in light of his 29 years in office with seemingly few tangible democratic gains for the country.

Africa Analyst from the Congressional Research Service (CRS), Alexis Arieff outlined key factors that continue to disrupt and undermine a democratic base in Cameroon.  Arieff’s analysis brought to light what she deemed, “patterns of self-perpetuativity” and the President’s uncanny ability to obtain a surfeit of 70% of the ballot.  These patterns consist of the almost identical voting outcomes during the last six elections.  Political violence and intimidation have come to characterize the electoral process in Cameroon, and she said that the international community should continue to press for transparency and accountability.  Human rights violations are accruing as citizens continue to voice their displeasure with the current government.

Due to allegations of the Cameroonian government’s harsh clampdown on the press, McDonald maintained that “there needs to be a legal rule of law process,” in order to resolve such discrepancies, particularly those involving the arrest and death of Bibi Ngota.  The stifling of political dissent and censorship were accusation that the delegation emphatically denied, while some members of the Diaspora in the audience challenged with specific examples.  However, the manner in which the upcoming election cycle unfolds will be indicative of whether or not the Cameroon government has acted in good faith.  McDonald stated that “there is always a disconnection between the Diaspora and those Cameroonians who live at home, [especially with] government officials” and expressed hope that this discussion would serve as an important connecting point between the Diaspora, policy makers, and government officials.

Minister/Director of Cabinet in the Office of the Prime Minister, Republic of Cameroon

Chairman of the Electoral Board of Elections Cameroon

Senior Advisor to the Prime Minister, Republic of Cameroon

Cameroon’s Ambassador to the United States