A screening of God Sleeps in Rwanda by Kimberlee Acquaro and Stacy Sherman, which traces the impact of the 1994 Rwandan genocide on the lives of the women who survived it. Discussion followed with filmmaker Kimberlee Acquaro and Norah Bagarinkah, genocide survivor and activist. An online exhibit of Ms. Acquaro's photographs can be viewed via the Holocaust Museum website. 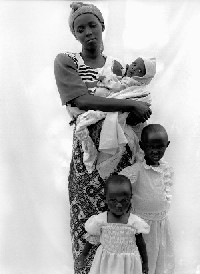 The Africa Program joined with The International Reporting Project at the Johns Hopkins University's School of Advanced International Studies (SAIS) to sponsor a screening of God Sleeps in Rwanda, a new documentary focusing on five women who survived the 1994 Rwandan genocide, and their efforts to rebuild their lives and their shattered country. The film has been nominated for two awards from the International Documentary Association, the Distinguished Short Film Award and the Pare Lorentz Award honoring films illuminating pressing social problems.

The screening was interspersed with commentary from Kimberlee Acquaro, a freelance photojournalist and one of the film's co-directors. Ms. Acquaro outlined some of the challenges that Rwandan women face, nearly a decade after the genocide. She noted that the disproportionate number of men among 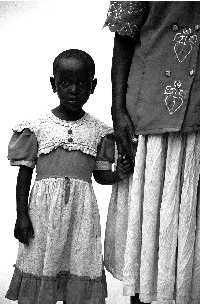 the 800,000 victims left Rwanda nearly 70% female, leaving Rwandan women with both an extraordinary burden and an unprecedented opportunity to redefine the role of women in their nation's future.

Genocide survivor and women's rights activist Norah Bagarinkah spoke of a newfound unity among female survivors, and said that for many, the tragedy served as a call to action. While the large number of rapes and sexual violence left many victims traumatized, the shared experience of victimization brought women together across social and economic divisions to speak about their experiences in the hope of preventing these abuses in the future.

After these comments, moderator Louise Lieff discussed the combination of artistic and narrative elements in the film, which she compared to Acquaro's earlier photojournalism. Moderator Howard Wolpe emphasized the political aspect of the events described in the film, noting that the crimes during the genocide that were recounted by the women in the film were carefully planned and coordinated by a faction within the government, and not the recrudescence of age-old ethnic conflict.

Questions from the audience focused on rebuilding efforts in Rwanda, including the community-based reconciliation process known as Gacaca, and programs to combat AIDS and promote economic reconstruction. Norah Bagarinkah offered cautioned praise for the Gacaca process but lamented the lack of training and literacy among Rwandan women, which hinders both reconstruction efforts and AIDS prevention initiatives. In response to another question, Kimberlee Acquaro explained that the title of the film "God Sleeps in Rwanda" referred to a traditional proverb about the beauty of the country, which says 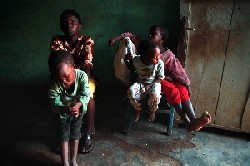 "When God wanders the world, at the end of the day He comes to Rwanda to sleep because He considers this to be the most beautiful place on earth." However, the title took on a dual meaning for her when considered in light of the tragic events the nation has witnessed in recent years.