The film documents how the Loess Plateau Watershed Rehabilitation Project rehabilitated various areas of the plateau by engaging the local farmers and government officials in planting trees, shrubs, and grasslands on the majority of land; creating terraces for agricultural activities; planting of orchards and vineyards; and constructing sediment control dams and irrigation structures.

Initiated in 1994 with funding and expertise provided by the World Bank and the International Development Association (IDA) , the Loess Plateau Watershed Rehabilitation Project successfully broke the cycle of environmental degradation and poverty in an area that had become known as the most eroded place on earth. Located on the upper and middle parts of the drainage basin of the Yellow River, the Loess Plateau is an area covering 640,000 square kilometers—approximately two times larger than Germany. This area has been the source of siltation in the Yellow River and the yellow dust storms plaguing Northeast Asia. The project encompasses twenty-one counties, seventeen of which are among the poorest in China. Previously known as the cradle of Chinese civilization—decades of unsustainable agricultural practices, population pressures, and poverty had led to an almost complete collapse of the Loess Plateau ecosystem.

The process of ecological destruction began with deforestation, which caused the soil to lose its ability to sustain the microbiological communities that live within it. This loss led to the dying away of filamentous bacteria and fungi which held the soil together. In this manner, the soil lost its ability to sequester carbon and retain moisture; thus over many decades the fertile topsoil and up to 95% of yearly rainfall was lost to the Yellow River. With the loss of the hydrological regulation mechanism in the ecosystem, even the local climate changed—becoming considerably hotter and drier.

The two principal aims of the Loess Plateau Watershed Rehabilitation Project (hereafter, Loess Project) have been to increase the income of local farmers and to reduce sediment inflows to the Yellow River. John D. Liu , founder and director of the Environmental Education Media Project in China (EEMPC) has been documenting the Loess project since its inception. Following the screening of the documentary for the CHINA ENVIRONMENT FORUM, Mr. Liu commented that although most multilateral aid agencies require income generation as a key consideration to providing funds, the Loess Project managers were exceptionally successful in demonstrating that economic stability and a healthy environment could only exist into the long-term within a symbiotic relationship.

The film documented how the Loess Plateau rehabilitated various areas of the plateau by engaging the local farmers and government officials in planting trees, shrubs, and grasslands on the majority of land; creating terraces for agricultural activities; planting of orchards and vineyards; and constructing sediment control dams and irrigation structures. The WB/IDA project also provided substantial institutional support in the form of training, providing vehicles and equipment such as computers, GIS software, and other information systems. Initially the farmers and government officials were skeptical about restoring so much land and leaving it for nature, but the desperate economic situation in the plateau region led them to cooperate with the project. Notably, the project managers were quick to learn from mistakes—for example, initially many trees planted died because of poor protection of the root ball, which is crucial for long-term survival of the trees. Project managers then designed different methods for packaging and shipping the trees, which greatly increased survival rates.

Mr. Liu remarked that the cumulative results of the project activities by 2002 were remarkable—huge tracts of land that were set aside for nature are nurturing young forests and productive croplands in valleys have been created. This stands in stark contrast to Mr. Liu's first visits when he encountered hot, dusty mountain slopes and valleys denuded of any form of plant life. He commented that when he first went to the Loess Plateau he did not understand the significance of the Loess Project activities, but now seeing the results Mr. Liu believes the lessons learned could have a significant impact both within China and beyond.

The project has indeed been a success on various fronts, with the quadrupling of local income within a decade, and the restoration of an ecosystem. This model for restoring large-scale damaged ecosystems by utilizing integrated and comprehensive land-use plans and land contracts is now being attempted in other parts of China, as well as India and Africa. Mr. Liu is screening this documentary in these and other countries to help disseminate the success story from the Loess Project. Some of the other organizations now involved in replicating this project include the Asian Development Bank (ADB), UK's Department for International Development (DFID), and Global Environment Facility.

Overall, the rehabilitation project has helped promote sustainable and productive agriculture and convinced local Chinese government planners and farmers that land conservation is compatible with income generation. Mr. Liu ended the film screening by noting that with this knowledge on how to repair degraded ecosystems, humans have the tools and responsibility to end unsustainable agricultural practices immediately. Such practices only condemn the poor to a cycle of ecological destruction and poverty.

The EEMPC does not sell their documentaries, but enquiries into obtaining copies of this or other films should be directed to Alex Mattholie at alex@eempc.org. 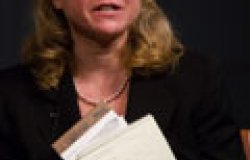