Is a Food Crisis Brewing in the Sahel?

While African nations and the donor community struggle to mitigate famine in the Horn of Africa, fears are growing that drought in the Sahel will trigger a similar food crisis in West Africa by the spring of 2012.

Is A Food Crisis Brewing in the Sahel?

“The causes are myriad: major shortfalls in food production in many areas, climate change impact on the livelihoods of millions of people, population growth, weak governance, escalating prices of basic foods, a drop in remittances from migrant workers returning from countries like Libya and Egypt.  No country in the Sahel is anywhere near to the goal of investing the 10% of GDP in agriculture that was set under the Maputo Accords by the African Union in 2003.  But unlike previous periods of severe drought, governments in the Sahel and the international relief agencies have been quick off the mark in acknowledging a looming food crisis.” stated Steve McDonald, Director of the Wilson Center’s Africa Program, to open the discussion on the growing threat of famine in the African Sahel with panelists from the Partnership to Cut Hunger and Poverty in Africa, USAID/FEWS NET, Oxfam, Michigan State University, the World Food Program, Catholic Relief Services, the World Bank and USAID.  This event centered on the reality on the ground as well as the potential actions, which should be taken to mitigate its effects.

Panel I: Understanding the “Crisis” in the Sahel 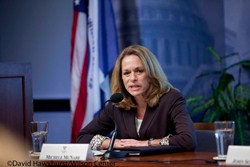 might be eminent in the Sahel and to assess whether the situation was comparable  to the Horn of Africa and whether a catastrophe is on the horizon for the Sahel and for policymakers.  Michele McNabb opened by posing the question of what kind of response would be appropriate, delineating between the current situation and previous cases, and pointing out that no one is wholly certain as to how the problem will evolve in the coming months. 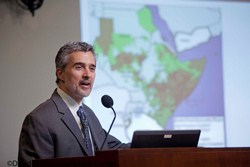 security or lack thereof in the region, given that underestimating the risk could lead to an insufficient response, and its overestimation may decrease credibility and “undermine the programs that are in place, including the important programs that are led by (African) governments.”  He predicted localized shocks to food availability rather than a regional crisis as seen in the Horn, and emphasized the importance of rational allocation and distribution of resources to prevent malnutrition in the future, regardless of the severity in the Sahel.

John Staatz of Michigan State University discussed the critical role of trade in addressing the needs of the region, indicating that in previous periods of food shortages, resources had been 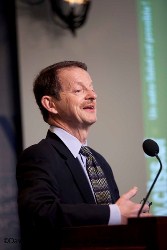 imported into the interior states of the Sahel from the more humid locations along the coast where food production is more stable.  This would be necessary because “The normal seasonality seems to have disappeared...  Normally, around November you would expect to see prices dropping, and what we see this year is that prices just keep on going up.”  He expressed concern with regards to trade, as it has become rigid since the economic recession of 2008, when countries began to doubt its reliability. That, in effect, has conditioned a response to the threat of food scarcity where anticipatory buying, both from people within the communities and from relatives in the diaspora seeking to provide for their families occurs, which has contributed to the food shortage due to speculation.

Eric Muñoz of Oxfam discussed the value of preparation in the event disaster befalls the Sahel, especially 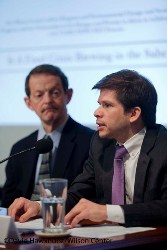 making effective use of resources in an era of fiscal belt tightening and budgetary constraints.  He opined that the Sahel is “a crisis in the context of a chronic emergency.”  Muñoz stated that “the primary responsibility for action is at the national level,” and that the donor community’s assistance in implementing the action plans of the most afflicted countries – Mauritania, Mali, and Niger – would be more economical than an emergency response later.  Ideally, the aim is to engender scenarios in which families and communities can act appropriately, through “no regret” options which are best for communities regardless of whether the situation escalates.

The second panel identified the sort of responses that should be taken in the face of a growing calamity.  Senior Wilson Center Scholar, John Sewell, moderated this segment of the proceedings and characterized the level of preparedness for 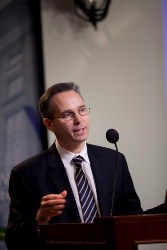 the next drought as “encouraging.”  Jacques Higgins of the World Food Program (WFP) focused on the confluence of consecutive crises in the Sahel, warning that “after a crisis, people are not able anymore to recover, to rebuild their coping strategies and resilience until the next crisis hits.”  He advocated for the expansion of cash for work and food for work programs as the lean season approaches in Niger, and for the WFP to support the programs proposed by the governments of Mauritania and Chad.  The real challenge, he said, is in addressing “the structural causes of food insecurity in the Sahel and […] of this quasi-permanent state of malnutrition.”

Ben Safari of Catholic Relief Services addressed the social and

political issues of workers returning from Libya, and the ensuing strain on resources.  He made clear that, in a famine, “it’s not necessarily that there is no food, it’s that the poorest people can no longer afford to access the food with their own means.”  In light of this reality, he underlined the past successes of voucher programs, which allow people to purchase local products that satisfy their particular needs.  Safari asserted that this option is not as costly and is more effective than bringing in food aid.

Greg Gottlieb of USAID concurred on the issue of vouchers, since “even when you have an emergency, you don’t have a failure of every system – markets still function […] they just function for some and not all.”  Gottlieb called for better integration of emergency and development work, which would allow for better planning, since “we’ve begun to see that a lot of the work that we do now on the emergency side, because we stay there so long, really is just a development program in another guise.”    He also urged better use of information to coordinate rapid responses.

of the World Bank maintained that there was a nascent urgency for intervening on behalf of the children in the Sahel and pondered what awaited the countries if investments are not made to protect the human capital, and posited that “twenty, thirty years later, these children are not going to be able to drive their economies.”  In this vein, she focused on maternal and child care solutions, and on the desirability of tackling the latent causes of these recurring crises.  She bemoaned the use of hunger as a variable indicative of vulnerability, reasoning that longer-term variables should be adopted because “using nutrition security as an indicator of vulnerability might be something that also helps us make the jump from this knee-jerk humanitarian response to a longer-term response.”

Emmy Simmons of the Partnership to Cut Hunger and Poverty in Africa, closed the session, highlighting the significance of an approach that gives rise not only to economic recovery, but to economic prosperity for the region as a whole.  She was hopeful that the wide range of tools and innovations that were presently available would prevent the current situation from spiraling to levels previously witnessed in the Sahel.

The Risk of Doing Nothing

The panelists sounded a common theme:  the argument of whether or not a “crisis” exists is not necessarily important; it is consequential, that steps are taken regardless of the Sahel’s designation.  Shekar observed, “the challenge of the crisis […] is that we don’t quite know what the exact numbers are or what they should be.  But does that really matter?  There is a chronic problem that is so acute.”  Staatz echoed a similar sentiment when speaking of Mali, saying “we may not see prices go too much higher, but this doesn’t mean people aren’t going to be hurt.”  The chronic nature of food insecurity in the Sahel means that the slightest change can provoke damaging shocks, and the situation on the ground necessitates that measures be taken to improve food security.