The Wilson Center's Mexico Institute and the Border Trade Alliance were pleased to host our fourth annual high-level "Building a Competitive U.S.-Mexico Border" conference, which focused on improving border management in order to strengthen the competitiveness of both the United States and Mexico. Specific emphasis was put on a cooperative bilateral framework, border and transportation infrastructure, binational economic development, and the need for efforts that simultaneously support security and efficiency in border management.

Governor Doug Ducey, Governor of the State of Arizona

José Martin García, Representative of the Mexican Finance Ministry and Customs Administration at the Mexican Embassy in Washington, DC

“When we see Russia as a friend and Mexico as an enemy, we know that the world has been turned upside down, literally. If you think about it, there are many countries out there in the world that are not as lucky as the United States to have a friend to the North and a friend to the South.”

“Some people feel that Mexico’s not doing anything for our security… If you look at the visa system that they have, it’s set up to help the U.S. in so many ways. Imagine if one day Mexico woke up and said, ‘You know, we’re going to start letting all the North Koreans come into Acapulco or all the Iranians into Cancun.’”

“Trade is not a problem to solve; it’s an issue to focus on and expand.”

“I will say that we couldn’t get that audience [and attention to the border] with the previous administration. Our border counties were ignored and neglected and that caused real damage. So I’m very hopeful for what’s possible with this relationship.”

“The volatility [and] the turbulence of the first six months of this year have had a silver lining, which is that – probably better than anything we’ve done in our existence – they have shown the importance of Mexico to the United States, of the bilateral relationship.”

“Ultimately, every state in the United States is a border state, because every state depends on what happens at the border.”

“In a very short period of time, Mexico has become not only a friend and a partner, but also an ally on the security front.”

“Regardless of the negotiating style of our president… it wasn’t too long ago that NAFTA – and we’re talking in the last couple of years – NAFTA was a bad word… That’s why we’d set our hopes on the TPP and fixing NAFTA through the TPP, because then we could kind of do it clandestinely and not have to talk about it.”

“[NAFTA] has been an incredibly valuable document, but it’s not as flexible and nimble as it should be.”

“There are absolutely people… who’ve lost out due to trade, due to globalization, due to technological changes that are under way. We need to be aware of that and not just gloss over that. We need to understand that these are real people and real communities that are hurting and we need to find real solutions for them.”

“Border modernization is really a way to kill two birds with one stone. It basically allows us to boost and improve trade and also to address security.”

On the Trump administration’s border wall proposal: “We have agreed to disagree. We are in the midst of a learning curve, the new administration here and the Mexican government.”

“The border is not international [and] the border is not domestic. It is ‘intermestic.’ There is that co-relation that we’ve been very good at co-creating over these years… We need to expand that. How do we go from ‘intermestic’ to more interdependency of not only our border communities, but our states?”

“There are walls that need to be built, but there are walls that need to be built in a very calculated fashion. There are still some areas where we need to build some infrastructure. Any border patrol agent will tell you that. Any law enforcement agent, regardless of what side of the wall they reside on, will tell you that, yes, there is need for infrastructure. Do we need 2,200 miles, 50-foot walls, solar-powered or otherwise? The answer is no. We need to do it smartly.”

“When I talk about my job, I tell people that I work for the agency that keeps America’s economy running. And I do, because, as you know, the vast majority of goods and services that are shipped across this country go by trucks.”

“We’re working together to build a safe and efficient highway network that spans North America. We all share a common interest in making sure that freight moves seamlessly and safely to help power our modern economies.”

“While that vast majority of all crossings remain lawful and beneficial, we do face dedicated transnational criminal organizations that are seeking to exploit the flow of commerce, but also cross between our ports of entry on our shared, almost 2000-mile, border.”

“I know that, publicly, there’s a lot of concern that the relationship with Mexico is strained. From my experience, from the cabinet level down, we are working as close as ever and have a tremendous opportunity ahead. And part of that [appearance of strain] is driven by the political calendar; our partners in Mexico are getting ready for a presidential election next year and in the U.S., we’re in a transition.”

“Instead of looking across our shared border and pointing at each other to do more, we are now looking south together and talking about joint planning and joint action.”

“This is a relationship that we are so very, very proud of, between San Diego and Tijuana. And I think that those of you who have heard us speak before know that we don’t really talk in terms of two cities; we talk in terms of one region.”

“Our department directors get together on a monthly basis to talk about key issues of concern, whether that’s public safety, whether that’s environment, whether that’s, of course, business. And we are united on growing good-quality jobs on both sides of the border. And it’s working.”

“We are here together in D.C. because we want to highlight the importance of our binational economy and our community, especially at this critical time… It will [involve] reviewing the renegotiation of NAFTA to benefit the two countries… We can do it…Whatever is going to be renegotiated can be done.”

“Together, Tijuana [and] San Diego have brought good jobs to Mexico and the United States. Together, we have made our cities safer... And together, we have shown why our region is [a] successful example, that building bridges [of] understanding is beneficial for our communities.”

“There is no shortage of opportunities around economic growth and development. And we’ve had some successes along the way, too, and real, tangible results and victories that have been able to communicate to the people of Arizona why this relationship is important.”

“We all know the difference between a growing, vibrant, dynamic economy and an economy that’s barely in the positive territory. Mexico, when we have had that vibrant, growing economy, has been a part of that, and so is North American free trade… These are not partisan issues; these are good policy issues.”

“We once branded ourselves the NAFTA railroad… If you look at our cross-border traffic, which represents about 40 percent of our total business… more than 60% of that is southbound. Sixty percent of our traffic is export business, freight moving from the United States into Mexico.”

“In a lot of these rural counties, [trade] is 50 percent of the economy. And so when… you realize how devastated a lot of these counties and states would be if you significantly shrunk international trade – and specifically NAFTA and trade with Mexico – it puts a little different light on the story.”

“Anything that is, you know, as old as NAFTA is… We have to accept the reality that there’s probably some things that it’s time to relook at... We don’t need to tear it down and build it anew; we just have some remodeling to do. I think the business community on the U.S. side has to take a strong stance.”

“This idea that, with or without NAFTA, some of these jobs and some of these manufacturing opportunities wouldn’t have shifted to a quality, low-cost labor force that’s geographically positioned at our southern border, I think, is somewhat ludicrous.”

“These are issues that affect the day-to-day lives of people… At the Department of State, we do a lot of high-level, 20,000-foot-type thinking… While we do all those things related to border issue[s] and border infrastructure as well, there’s a real, tangible element to it, and a domestic piece.”

“Perhaps the biggest mistake that we’re making in the U.S. right now is thinking about the U.S.-Mexico economic relationship as a win-lose type of relationship… If we can focus on workforce-development more, it makes a stronger argument for companies to expand, not in Mexico or the U.S., but in both places together.”

“With our model, you can look at where most wealth is created or in which industry wealth is most created. And thus, you can invest more in education, looking at those industries.”

“There is a real opportunity for the border to try to capture some of [that] advanced manufacturing locally… And that is precisely because the border can bring together the best of the U.S. and the best of Mexico under one roof, in the best geographic location, to meet… North America’s mass customization consumer demands.”

“Economic development is not just building stuff. It’s building the capacities for those things to expand or grow or attract new ways of thinking… Economic-development borders are not defined by, necessarily, a wall or a bridge or something else. They can go across the border. They’re self-morphing.” 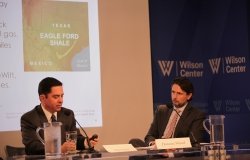 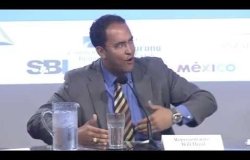