Managing Director of the International Monetary Fund (IMF) Christine Lagarde will give her first economic policy address in Washington, discussing the enormous challenges facing the global economy and offering her views on the policies that can help to restore growth.

Lagarde has insisted that governments and central banks are not out of policy options in the face of the latest stage of the global crisis, but believes they must act decisively to avoid severe consequences. There are many views on possible policy responses to the crisis but it is clear that governments and international organizations must act together to avoid an even deeper crisis, and many are looking to the IMF for guidance.

Lagarde, who previously served as France’s finance minister, was appointed IMF chief on July 5, 2011. She is the first woman to head the institution in its 66-year history.

After the event, Lagarde sat down to discuss the need for collective action to lift ourselves out of the global economic crisis and the importance of a nuanced approach that goes beyond black-or-white partisanship. Read more of The Wilson Center's dialogue and scholarship about the IMF, the global economy, and economic crises. 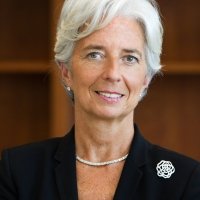 Article
Economics and Globalization
Biden and Europe Can Build on a Resurging Transatlantic Economy
By Daniel S. Hamilton on June 10, 2021